I was not brought up into a travelling family.

Which is strange because my mum can speak some French and regales many tales of a trip she took with Dad to Amsterdam, and I’ve seen some great pictures of her in Paris. But somewhere along the way, they settled down into farming and haven’t been abroad since.

Until 2011, that is, when they came to visit me in Brighton for my birthday, and I suggested that we go across the water to France. Being me, I came up with all sorts of lavish plans like “let’s go to Brussels” and “well we might as well go to the Netherlands if we do that” and “how about Luxembourg?? That’s not that far”. (these were all me, you understand. Mum flicked them away like flies.)

In the end, we settled on Belgium – Ypres, to be exact, for some war history and European architecture – via Dunkerque. Not Bruges as I did kind of insist.

There is a little debate on how Ypres is both spelt and pronounced (Ypres or Ieper), and after our early morning car train under the channel, we spent much of the journey discussing it. Mum called it Wipers, a nickname actually given to it by British troops who ALSO didn’t know how to pronounce it. 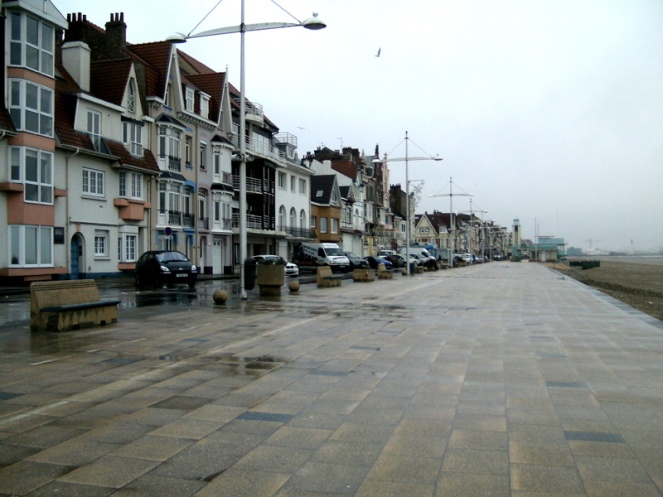 Of course, the weather was terrible. 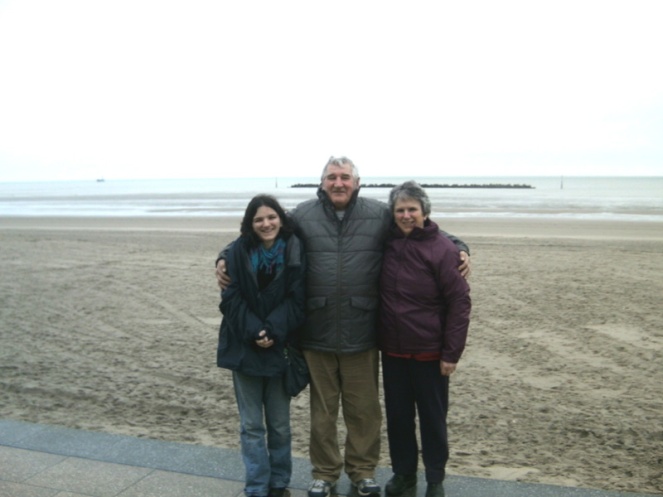 As were my pictures.

We wanted to pay tribute to the events of Dunkerque beach, but that didn’t happen to the extent we would have liked.

While we stopped, Mum and I popped into a bakery and she asked for some cakes. The woman behind the counter pretended not to understand her until someone else in the queue chimed in by repeating exactly what Mum had said but with a single ‘la’ or ‘le’ different. Magically, the lady understood and we left with a new understanding of the French stereotype – which is sad, because every French person I’ve met since has been lovely!

We made another stop in Adinkerke, just over the Belgian border, before turning off onto the N8 towards Ypres. 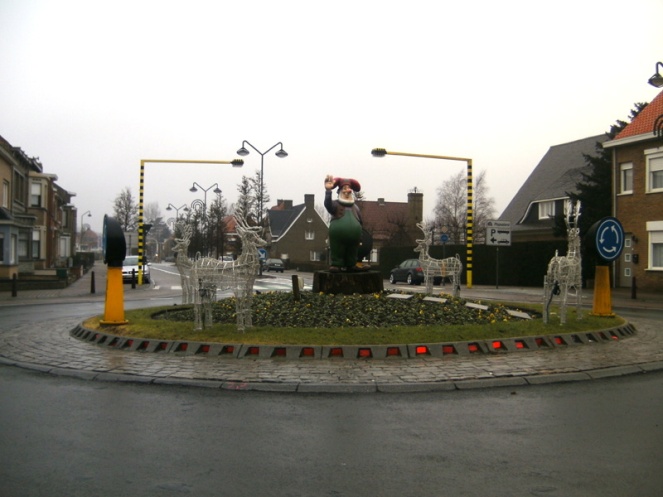 I made Dad stop, of course, so I could get a picture of this jolly roundabout. This was close to the amazingly named Plopsaland theme park which I’ve had a desire to visit since we passed it all those years ago! 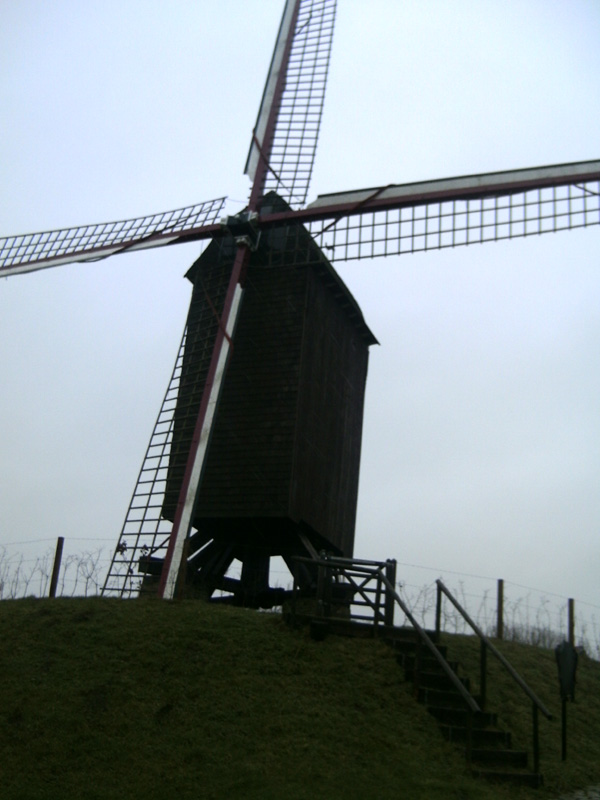 And an obligatory photo stop at a windmill too, obviously.

We arrived in Ypres with slightly better weather (by which I mean it had stopped raining) and it was finally time to take in some sights. First stop, though, was lunch next to a building with many, many, many windows – and by lunch, I mean waffles! 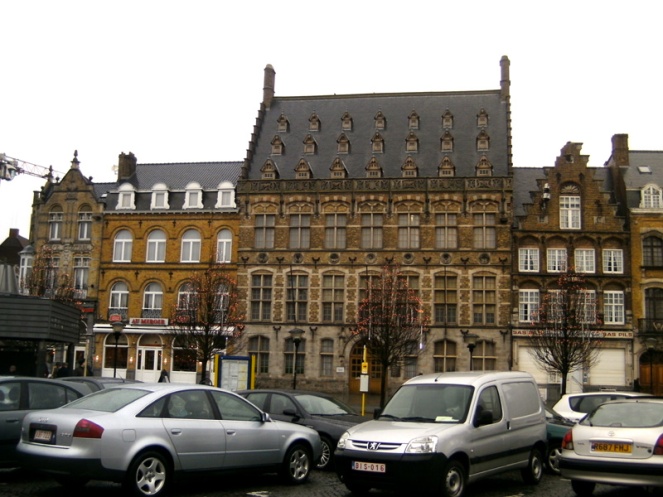 We set off for the cloth hall, an impressive centrepiece of Ypres overlooking the town centre. I didn’t realise until now that it’s a UNESCO World Heritage site, being one of the largest medieval commercial buildings in the world. Built around 1300, it has been used as a market for centuries. 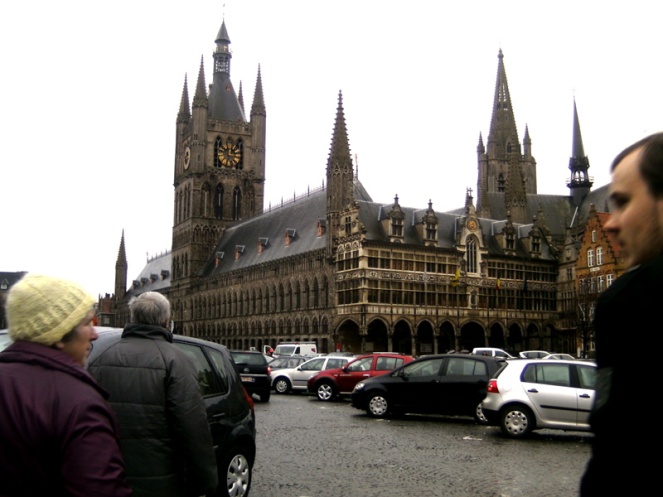 Behind it lays St. Martin’s Church (also known as Ypres Cathedral, although it is no longer a cathedral) which was originally built in the 1200’s, but after being destroyed in WW1 it was rebuilt. So although the church is steeped with history, the actual building is fairly modern.

Inside is absolutely beautiful too. 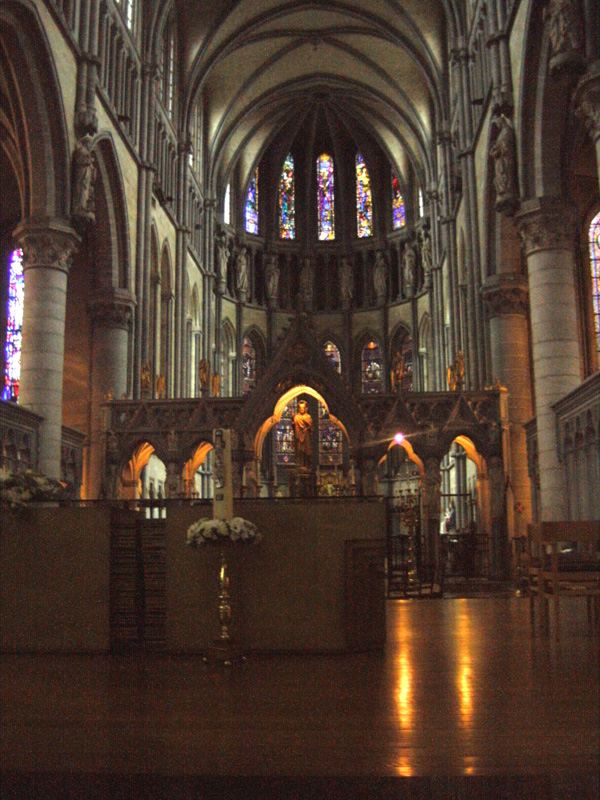 We spent a while in here before shopping for Belgian chocolates and taking a walk along to the huge memorial at Menin Gate. 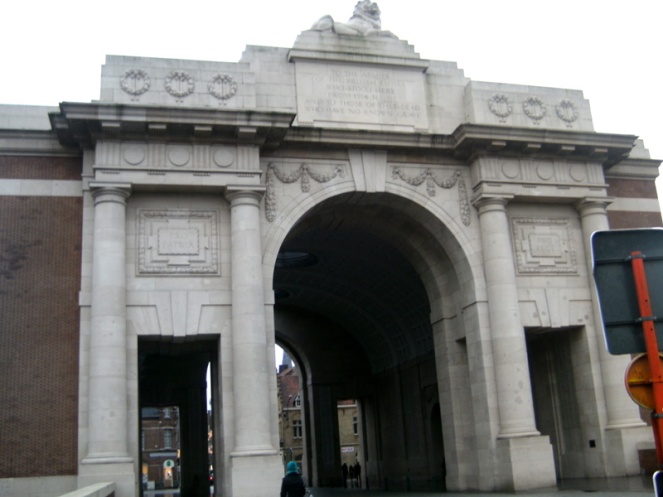 Ypres was no stranger to war, even back in 1914. It had been in battle with the Romans, French and almost the Spanish, it had been passed back and forth between France and the Netherlands, and some of their forts date back to the 14th century.

The biggest attack in the town was the Battle of Passchendaele, which killed almost half a million people, a number I can’t even begin to fathom. Menin Gate lists all of the British and Commonwealth soldiers killed or missing up to August 15th, 1917 when they realised there was no room left on the memorial and another 35,000 soldiers are listed at the cemetery. When you see just how big it is (my picture, like many in this post, doesn’t do it justice), it takes a while for that to sink in.

Interestingly, I also read that New Zealanders are not listed either, though they are at Tyne Cot cemetery, our next stop. Interesting because when we visited Te Papa museum in Wellington and they had the most amazing war exhibition on, we were taken aback by our lack of knowledge of New Zealand’s involvement in the war at all – and yet here we were at a memorial that doesn’t even acknowledge them.

Tyne Cot cemetery is the largest Commonwealth war cemetery in the world. 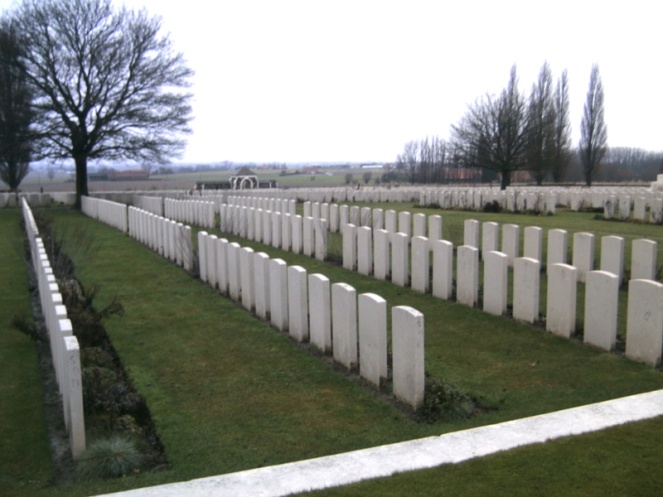 It’s beautiful and eerie and it takes a while to take it all in. 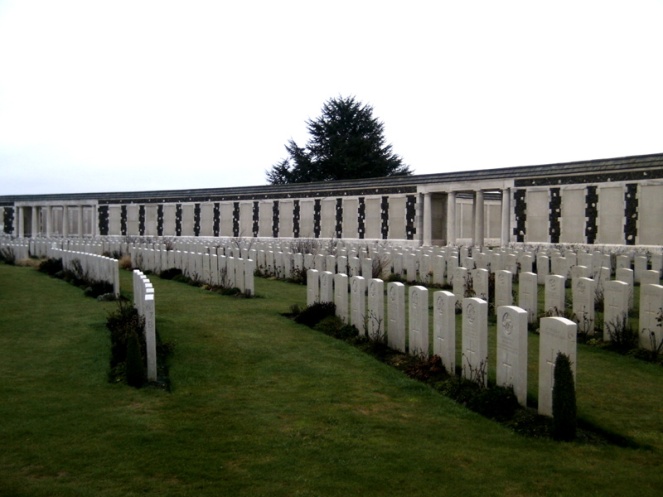 To end this on a rather more lighthearted note, on researching Ypres a little more, I have discovered three amazing events that are held there (taken from Wikipedia so it must be true):

The Cat Parade (“Kattenstoet”) takes place every three years on the second Sunday of May. It involves the throwing of stuffed toy cats from the belfry and a colourful parade of cats and witches. The next Cat Parade takes place on 13 May 2018.
Ypres holds an annual canoe polo tournament in which teams come from all over Europe to play.
During the last weekend of August each year, Ypres hosts the Ieperfest, one of the biggest European festivals in the hardcore punk subculture.
So there you have it, a cat parade, canoe polo and a hardcore punk festival. Basically: Ypres is a crazy place and you should go.
Have you been on a trip that focuses on war memorials?

3 thoughts on “#tbt: The Only Time I’ve Been Abroad With My Parents”