Of all the places that took us by surprise on our road trip, I think San Diego comes out on top.

It wasn’t even on our initial itinerary. I was pretty sure we weren’t going to have time, especially when I found out that Yellowstone National Park closes on November 5th and we’d have to cut a couple of days from our trip to get there in time (and to allow us to actually spend time there).

But then we only spent one day in Yosemite, which, if we were sensible, gave us a rest day.

…If you know anything about us, you’ll know there is no such thing as rest days, and we are definitely not sensible. We have a spare day? Screw it, let’s go to San Diego!

We had one, single thing on our list for the city: San Diego Zoo.

I used to love reading all about different animals on our CD ROM of Encyclopaedia Britannica, and (I can’t believe I even remember this) it was on here that I first learned about San Diego Zoo. I read all about the Galapagos tortoises, and to be honest I can’t remember what else made me want to visit San Diego Zoo when I was a child, but it’s pretty much renowned as the best zoo in the world, which is what has drawn my attention to it ever since.

Ash had actually been to San Diego Zoo before – he confirmed that it was, indeed, the best zoo in the world. I tell you – I couldn’t WAIT!! 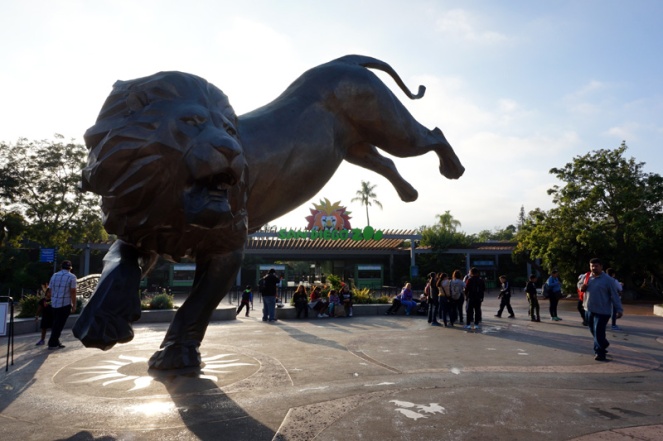 We got ridiculously lucky. As we were walking towards the entrance, a lady approached us and asked if we already had tickets. I eyed her up warily as I drew out my “noooo…”. She obviously sensed our apprehension and smiled.

“Oh, no. I was just wondering – I have a membership, and my son isn’t with me today, so if you’d like, I can get one of you in and you could give me $20 or something towards it.”

That should have been our first sign that San Diego was going to be awesome.

We chatted in the queue; her mother volunteered regularly at the zoo, and she told us which animals we should definitely see and which ones had babies recently. She was so friendly! Once we were through, I handed her $20, she told us to have a great day and off she trotted.

I thought we were bound to bump into her again.

San Diego Zoo IS HUGE!!! Absolutely freaking massive. But, as I learned at Australia Zoo, it’s not the size that matters, it’s what you do with it. Ooh-err!

Well, unlike Australia Zoo, San Diego Zoo certainly does maximise its space. It’s also a lot more organised, although there was one section that brought back some memories of Australia – winding, intersecting paths that we got lost on more than once!

Everything else, though, was laid out fantastically, and all the animals have plenty of space.

We headed straight for the reptile house, because it was closest and we normally just meander through pretty quickly. I don’t know how long we ended up being in there, but they have SO many animals in there, it’s insane. They have a ton that I’ve never heard of. They have colourful and powerful snakes. They have a lizard that is ONLY found in FOUR STREAMS IN IRAN. 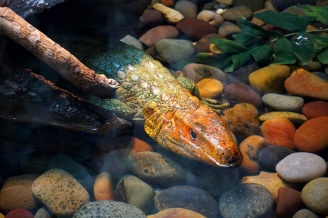 When we eventually made it out of the reptile house, we made a bee-line for the Galapagos tortoises. Only… we didn’t stay there very long because they were all a bit pre-occupied.

The polar bears were incredible; I was really impressed with their enclosure because it’s massive (I know, it’s not quite the wild), and just as we turned up to the outdoor bit, a play-fight broke out which was amazing to watch! 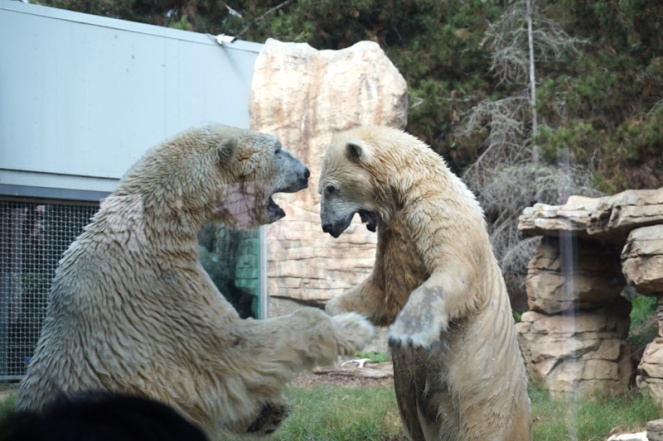 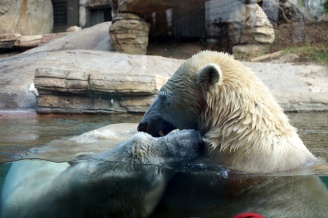 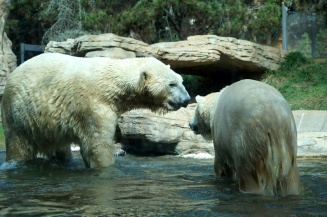 There were plenty of “the usual” animals too – elephants, giraffes, zebras, camels, flamingoes, penguins, crocodiles, apes, and lots of monkeys. 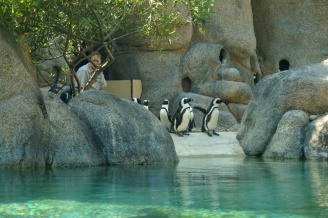 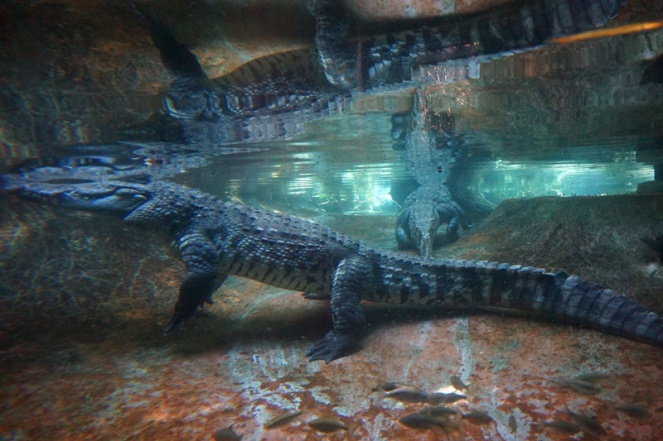 Ash loved the aviary and we ended up walking through it a few times, not always on purpose, but sometimes it provided a shortcut! I don’t know if I’d ever seen a toucan before, but I’m 98% sure I’ve never got a photo of one. They’re so pretty! 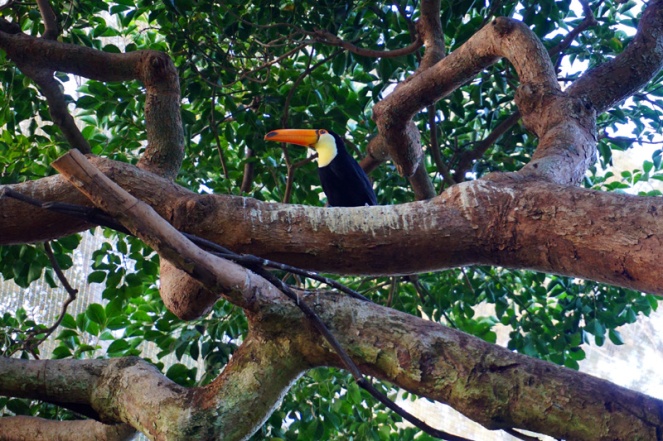 We spotted some unassuming anteaters, and although I’ve definitely seen them before, I’ve never seen them up and about! They’re normally looking like this one. 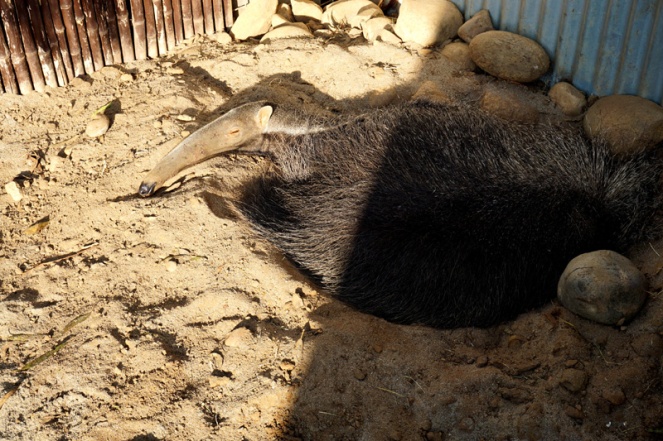 We also saw a cheetah out for a walk.

She even had a companion dog, which was adorable! The only problem is, this caused the first and only sign of distress that we saw in the zoo – when they left again with the dog, she paced up and down her enclosure squeaking! 😦 😦

We ended up staying at the zoo until the very end of the day. We finished up by taking the Skyfari cable car across the park – which was a big mistake, because of course everybody (literally about half of the people in the park, I think) was queuing to come back the other way. And after an entire day of walking, there ain’t no way I was walking all the way back across the damn zoo. (Did I mention that it’s huge?!) 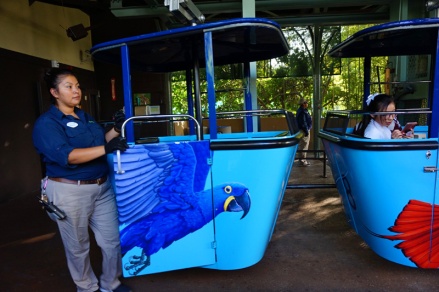 So we did literally get out just as it was closing, and set off towards University Avenue to meet a friend for drinks and tacos.

And that’s when we realised our mistake. 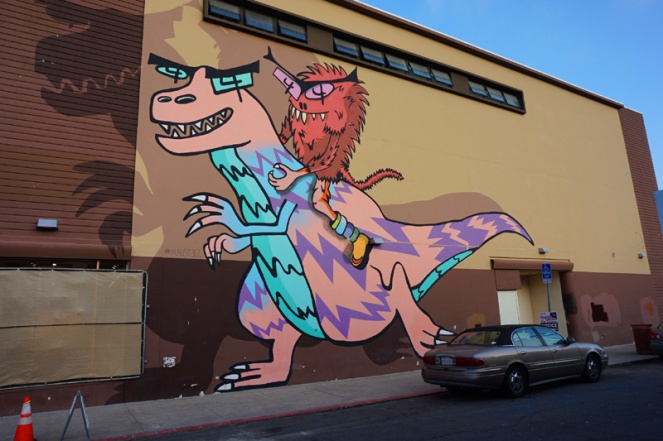 We were in North Park, a trendy area of San Diego that is yet another classic example of gentrification. It still looks like it could be rough around the edges, but doesn’t feel it at all.

We had a drink in the colourful and fun Tamarindo’s, where Ash accidentally ordered a 9% beer and then wondered why he was feeling it after two, and then set off in search of tacos. Naturally, I had been drawn to the eccentric Lucha Libre Taco Shop, but our friend guided us swiftly to City Tacos. She insisted that while Lucha Libre IS cool, the tacos are sub-par – but City Tacos are the bomb diggity. And trust me, you listen to locals, especially when you’re having tacos in San Diego. 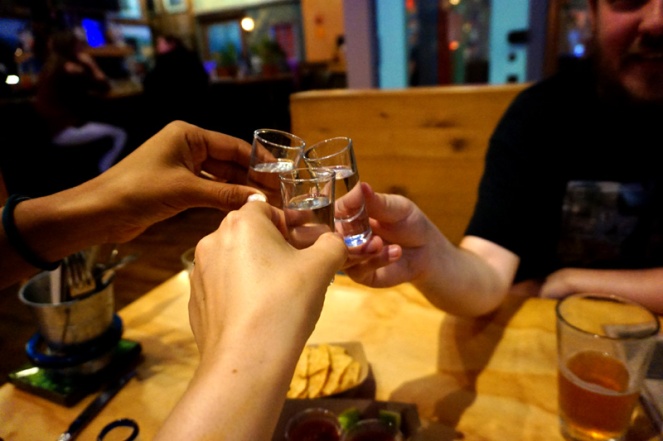 City Tacos was busy as hell, and while we were queuing we managed to grab a table inside. They were, of course, delicious. The queue said it all, really.

Afterwards, we did pop into Lucha Libre just because I wanted to see for myself how crazy it is – and it was absolutely dead. That spoke volumes. It’s actually the second store, the more famous one being on Washington Street.

I was kind of disappointed to see that this one was completely different to the one I’d read about.

It was long and narrow and the only seats that were taken were the champion seats, so I couldn’t even get a good photo of their iconic champions booth! However, all was saved – because there was only a sodding wrestling ring at the back, rendering it MUCH cooler than the other place!

We still had a bit of time before we HAD to set off back towards LA, so we popped into Hammond’s, one of the dessert places I’d read rave reviews about. ONE OF. THERE ARE MANY.

MANY AMAZING PLACES I STILL NEED TO TRY IN SAN DIEGO.

WE LEFT YOU TOO SOON.

Also, the ice cream in Hammond’s was amazing, although I’m not sure it beats Salt & Straw in Portland. However, you can get FLIGHTS of ice cream on tiny cones!

But alas, we had to leave, despite gripping onto the embers of time we had in the city and with our truly fabulous friend.

San Diego also has one of the coolest looking hostels I’ve ever seen (and that’s saying a lot) and I do kind of wish beyond anything that we had stayed there the night before. Unfortunately we couldn’t stay there that night as we had booked ourselves into an even more awesome place on the outskirts of LA – you’ll find out more about that in the next post! (Spoiler: it was a wig wam.)

It’s funny – I’m sure I’ve heard from several people in the past that San Diego is a bit of a dive, and that’s why I was happy with a day in the city, and only had the zoo on my list. Maybe it used to be, I don’t know. But as we got closer, we kept hearing that it’s amazing. Consistently. It definitely goes to show that you should decide for yourself and not just rely on opinions.

I am very grateful to my friend for introducing us to an area we may never have discovered on our own. But one thing’s for sure – a day is NOT enough, and especially not if you spend that whole day just at the zoo!

So, surprisingly, we were very sad to leave; and even more surprisingly, San Diego has been added to our never-ending “must return” list. I don’t know when we’ll be back, but I’m sure we will.

Have you ever fallen in love with somewhere you completely did not expect to enjoy?

⭐ The Perfect Day(ish) In San Francisco
⭐ Yosemite In A Day: All Of The Incredible Views In Yosemite National Park
⭐ Hiking Angel’s Landing In Zion National Park
⭐ Antelope Canyon and Horseshoe Bend: The Gems of Page, Arizona
⭐ Finding The Weird, Wonderful & Awesome: Driving From LA To Las Vegas
⭐ Ticking Off A Bucket List Road Trip: Driving Highway 1 & Big Sur
⭐ Hikes, Sunsets and a Crazy Camping Adventure at the Grand Canyon
⭐ That Time We Were Trapped In Monument Valley
⭐ Arches National Park and a Surprising Stop In Moab