We were in no rush to leave Zion, which meant we could meander slowly towards Page, in our sixth state of the road trip, Arizona. Page was another repeat visit for me, but last time I was there, we took a walk to the now Instagram-famous Horseshoe Bend and took a quick dip in Lake Powell.

This time, we were skipping Lake Powell in favour of another Instagram hit: Antelope Canyon! 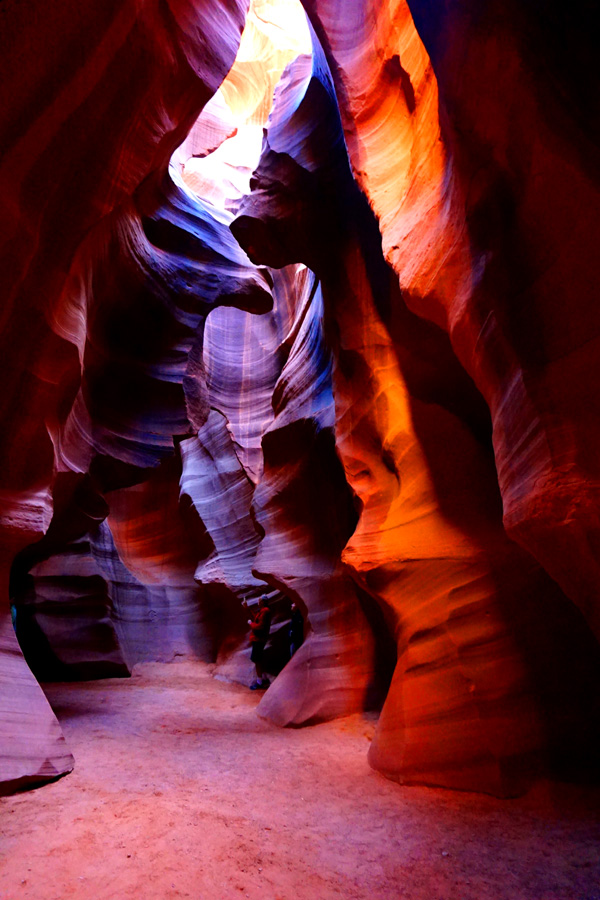 Antelope Canyon has been on my list since approximately two months after I was last in Page, when I discovered with horror that we had completely missed it. I made it my mission to get there next time, and over the years I’ve watched with uncertainty as the slot canyon has exploded in popularity.

It’s definitely suffered from the “Instagram effect” and it showed from the fact most of the tours had sold out when I tried to book it a month in advance. Luckily, there were a couple of times left with one tour company, and it happens to be the only company that is actually “on-site”, so to speak! (Most of them truck you out from Page proper.) They only had afternoon spaces left, which I noted with disappointment meant that we’d be missing out on the famous sun rays filtering into the canyon and creating mindblowing photography opportunities.

In fact, you can even book yourself onto dedicated photography tours, which seem to have been latched onto with the same infatuation as the regular tours!

It turns out that you’re unlikely to see the sun rays in the winter anyway, so that made me feel better about missing out. But if you’re set on seeing them, make sure you book a tour a few months in advance, especially in the summer!

We left Zion mid-morning, absolutely amazed at the alien-like landscape on the other side of the valley. The tunnels are amazing, and we had to stop a couple of times for big-horn sheep in the road. From there, it was only a couple of hours drive to Page, and even though we’d relished a bit of a lie in, we still arrived way too early for our canyon tour, so we hit up Horseshoe Bend first.

Horseshoe Bend has become the ultimate Southwest USA Instagram darling. Ten years ago, we were virtually the only people there, and other than the path leading down to it, there was no infrastructure. In 2018? Swathes of people were descending onto the viewpoint, where there are dedicated viewing platforms and everyone is trying to find a space for a 10-minute photoshoot.

It wasn’t chaos, but it was completely different to how it used to be. I’d never heard of Horseshoe Bend when we stopped by it ten years ago – but now it’s unmissable.

The thing is though, it’s for VERY good reason.

It’s without a doubt one of the most beautiful places I’ve ever seen. It blew me away when I first saw it, and it blew me away again this time.

I’ll admit: I did get Ash to take… umm, a fair few photos of me! 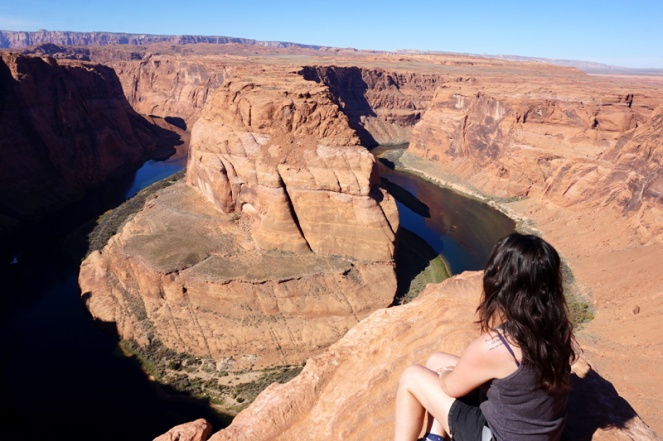 But it was never for more than 20 seconds at a time, while around me, girls were setting up entire photoshoots and doing their hair in front of iPhones! It was insane. I totally get wanting some pretty photos (after all, I was basically there for the same thing), but not at the expense of enjoying the location – or getting in everyone else’s way! I think this is the first time I’ve REALLY experienced the dreaded “Instagram effect” to this level.

We spent quite a while up there, mostly because I was experimenting with my photography, but also because I could use any excuse to enjoy that view for longer. And it is pretty much a perfect place for a photographer… and for shameless posing.

By the time we left, we were still way too early for our tour. We passed more time with a pit stop in Walmart (which was by all means necessary anyway) and then decided to drive to Antelope Canyon to check in early.

It was extremely fortunate that we did – they asked if we wanted to join an earlier tour, because it only had two people on it!! I apologise to the other couple for ruining their completely private tour, but to only have four people in a group as we watched entire trucks of people ready to fill the canyon was about as lucky as you can get!

But with the crowds, I had some concerns. Was I going to be able to get ANY photos without anyone in? Was it going to be claustrophobic with lots of people in there? Would the magic be completely taken away by how busy it is?

The great thing about Antelope Canyon is that the tours aren’t there to be filled to the brim and make the canyon unbearable, which is what worried me the most. The Navajo guides are extremely aware of this, and they are very careful and deliberate to move their group on and leave each area empty for the next group. That means that you are pretty much always just in your own group, which gives you breathing space and time to take photos.

Importantly, every tour company is Navajo-run. This is Navajo land, and they are concerned with respecting it more than anyone else. That’s why you can only visit Antelope Canyon with approved tours, which helps to keep them sustainable and preserve the area.

The other thing I loved is how the guides make it totally about you. Our guide, Scott, showed us where and how to take the best photos, and he was so on-hand and friendly with any information. The couple we were with didn’t speak a lot of English, so they sort of kept themselves to themselves and we chatted with the guide.

This wasn’t Scott’s main job. He’s also a nurse in Phoenix during the week. But Antelope Canyon is on the land he grew up on, and he regaled many tales of his childhood, with the canyon experiencing flash floods, and he pointed to the roof of the canyon where we could see debris.

“See that?” he said. “That’s how high the water gets sometimes when it floods!”

He showed us a video of a car being swept away just outside the canyon, his brother desperately trying to retrieve it. You hear about flash floods in the desert, but I’d never seen footage of one.

We talked about the sustainability of the canyon tours and how much it’s changed in the past five years, about his childhood on the farm and his life now as a nurse.

Never mind the canyon – I was finding his stories just as fascinating!

The slot canyon runs one way, and when you come out the other side, the only way back is back through the canyon – I managed to snap a couple of photos where I could, but generally you are ushered on, otherwise you end up in people’s way. Despite that, if we found a quiet area, our guide was more than happy to let us stop and take some more photos, as long as we weren’t holding up another group. 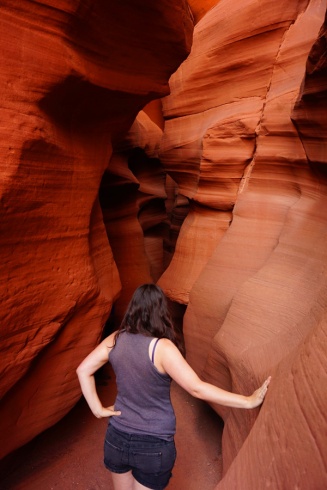 So would I recommend Antelope Canyon?

I had all the same concerns raised by plenty of other people about the booming popularity, but I really, really enjoyed the tour. Even though it’s not entirely at your leisure, the guides are careful to make sure you get the most out of the visit and I honestly never once felt rushed. However, we had a couple of people in the group ahead of us who CONSTANTLY got left behind because they were taking about 2,000 photos, and they kept getting in my shots and holding us up – and eventually the group behind us, too! They were told off… a LOT.

Seriously, if you want bags of time to take a million photos, then I think you’re better off booking a photographer tour.

But I feel that all things considered, the tours here are handled and organised really well.

And the canyon itself is stunning. I never thought I’d stand around admiring perfect waves of lines across rock, but the wind-swept erosion and narrow gaps has made it this fascinating piece of geology.

As long as the tours remain sustainable, it doesn’t matter to me how touristy this place seems from the outside. Once you’re in, you’ll be hooked!

Page is one of my favourite parts of the US, and the epitome of the south west. But this was just the beginning… we still had some absolutely epic stops coming up!

⭐ The Perfect Day(ish) In San Francisco
⭐ Yosemite In A Day: All Of The Incredible Views In Yosemite National Park
⭐ Hiking Angel’s Landing In Zion National Park
⭐ Finding The Weird, Wonderful & Awesome: Driving From LA To Las Vegas
⭐ Ticking Off A Bucket List Road Trip: Driving Highway 1 & Big Sur
⭐ Hikes, Sunsets and a Crazy Camping Adventure at the Grand Canyon
⭐ That Time We Were Trapped In Monument Valley
⭐ Arches National Park and a Surprising Stop In Moab

We visited Antelope Canyon with Antelope Canyon Navajo Tours. Tours are about an hour long which costs $60, including an $8 entrance fee to the Navajo Tribal Park that goes towards conserving the Navajo land, and must be paid in cash. As above, I fully recommend booking well in advance – we went at the end of October and I booked a full month in advance, and there were hardly any options left. However, I fully recommend the company we went with!

47 thoughts on “Antelope Canyon and Horseshoe Bend: The Gems of Page, Arizona”