I’ve got to be honest with you right now: I’ve always hated the Loch Ness monster.

I don’t know if it’s because I kind of grew up with it, knowing that all these tourists come to see something that isn’t even there, and it’s all lost its novelty. Maybe it’s because Scotland has so much to offer, and it frustrates me that one of the most famous things about the country is something that someone made up.

But I also hate to be negative, so for one whole day (or at least half a day), I embraced it.

Actually, I didn’t want to. We wanted to visit Uruqhart Castle, half way up the side of Loch Ness, the ruins nestled into its banks for ultra scenic views.

But when we pulled into the car park, it was rammed. To be honest, I was surprised – I had expected hordes of tourists all the way along the route we took, being one of the most popular road trip routes in Scotland in the height of summer. And yet, apart from the chaos of Glenfinnan’s car parks, we really hadn’t experienced any crowds. At least, no problematic ones. We often had the road to ourselves through Glencoe, and the crowd at Loch Lomond wasn’t bad, so I figured the further north we go, the more the tourists will thin out anyway.

And it couldn’t even be explained by it being a weekend, either – it was Thursday. So we were a little perplexed when we pulled off the road to join the queue for the car park – wait, the queue?! – only to find that… we were still on the road, and the car park was all the way over there. There wasn’t a hope in hell, and we were told as much by the increasingly exasperated parking attendants. We still tried twice, but had to give in.

Nessie it was. Just up the road and round the corner from Uruqhart Castle lies the delightfully named Drumnadrochit.

I am sure that once upon a time, Drumnadrochit was a cute, quaint village. Now it’s ultimately Tourist Town, and although it was far less bustling than other places we had been, there wasn’t anything to do other than be a tacky tourist.

This sort of tacky tourist.

We had decided to embrace it though, and went all out by going into the Loch Ness Exhibition Centre (not Nessie Land) to learn all about one of the most famous monsters in the world.

Except, the exhibition actually earnestly disproved all the Nessie theories, explaining the photos and talking about all the unsuccessful surveys to find the famous monster. I wasn’t sure whether to be glad or just wonder why they’ve done it. There was an air of mystery added to it by the fact that Loch Ness is simply so huge and so deep that it hasn’t fully been explored (you know that whole thing about how it’s crazy that we know more about outer space than we do about our own oceans?) and if you’re into the geology of the area, I think you’d find this place really interesting.

We didn’t leave thinking “well that was rubbish”, but we did leave with a kind of “what even was that” feeling.

We still had an afternoon to kill, so – guess what, guys? – I wanted to go for a hike. It was actually a fairly nice day, so we took a drive out to Glen Affric. Where it started raining. Are you freaking kidding me? 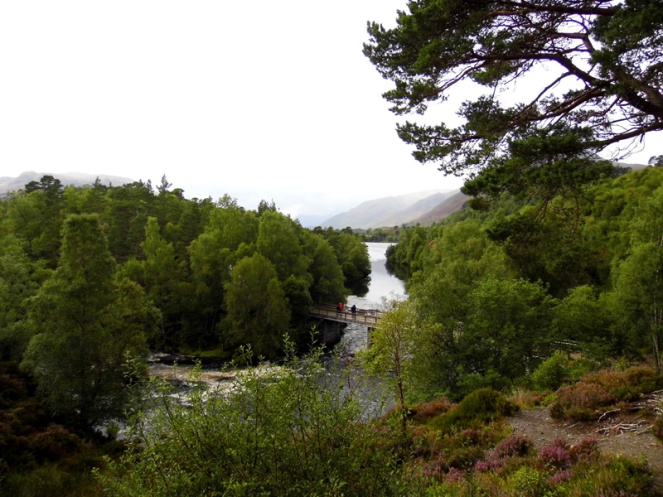 Determined to do something, we walked up to a viewpoint, but I wasn’t really feeling a full on hike. Dejected, we stopped by a pretty part of the river to have a picnic lunch before carrying on up to Inverness.

I actually really like Inverness – from Orkney, we have two cities that people visit fairly regularly for shopping: Aberdeen and Inverness. Most people will go to Aberdeen due to the ferry going straight there and the timetables making it an easy weekend trip. But the more I visit Aberdeen now, the more I hate it, and the more I visit Inverness, the more I like it.

That said, I still haven’t done anything touristy there. We saw the castle, but didn’t go in. We went… to the shopping centre. And walked down the high street. And got stressed out trying to find a campsite because all the ones we called were expensive.

Eventually, we found one right outside Inverness, and it was perfect.

The owner was ridiculously friendly and helpful, the location was unbeatable (on the shore 5 minutes drive from the city), and there was a burger & coffee van run by a really nice lady too. Everything about it was lovely, and it was a whole 10 quid cheaper than the other places we had called.

Our day hadn’t really gone to plan at all (what even did on this trip?!) but it all turned out lovely, and it was the first evening we had where we could just sit and enjoy with no rain at all. Thank you, Inverness!

Because we were way ahead of schedule, it meant we could also have a lie in, grab breakfast from the van and leave when we liked. Once again, the rain meticulously worked around us, and by the time we pulled into Dunrobin Castle, our only actual plan for the day, the SUN had even come out! I know!

Even more luckily, we arrived at Dunrobin just in time to grab some seats for the falconry show, and the rain held off for the whole show.

I loved Dunrobin, but the falconry show was actually a highlight! The falconer was entertaining – informative, passionate and hilarious – and the birds all had wonderful personalities with a bit of mischief, which seemed apt. One of the falcons even attacked another bird mid-flight and brought it down in front of us! The falconer had to move with some speed to stop it killing the other bird, and everyone clapped when it flew away. Pretty dramatic and heart-stopping to witness, but nature is as nature does. 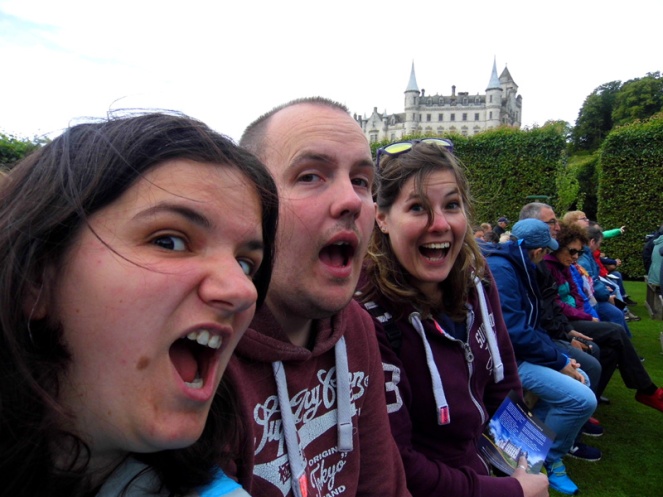 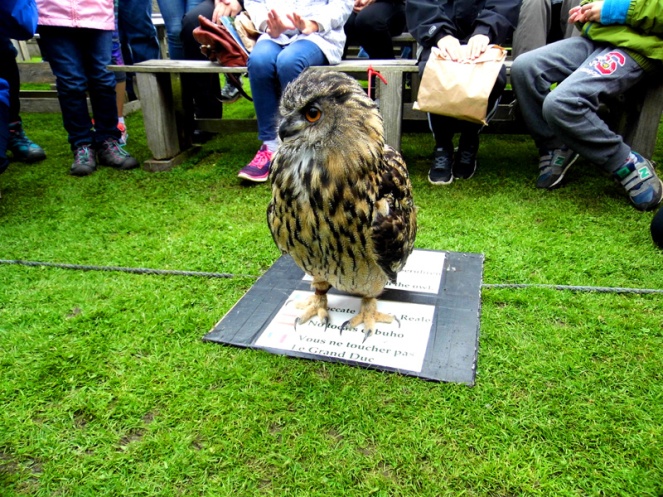 It was also the one time on this trip I wish the zoom was working on my camera! 😦

Unfortunately it’s strict no photography inside the castle itself, but let me tell you it’s pretty grand and amazing! The library has 10,000 books, so if you’re a bookworm, you’ll love it!

While we were in the castle, the rain had started (again, great timing ye weather gods!) and as we moved further north, the A9 gradually became more and more flooded.

Normally I love this journey – the “less popular” side of the north coast 500 – but we could barely see the road, let alone any of the surroundings. And that’s why I’ve consolidated our last two days into one blog post. We couldn’t even stop in Helmsdale, a highlight of the route. We almost couldn’t leave Helmsdale either because of the flooding.

The weather got so bad that Mr Meeseeks fell over in shock. (Gulliver was totally unfazed). 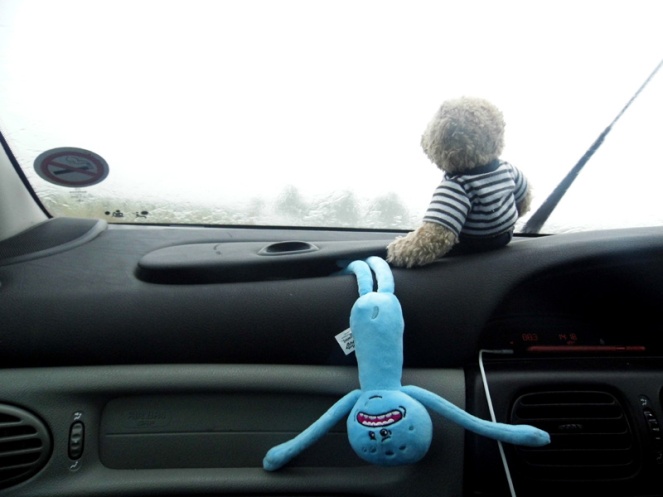 By the time we got to John O’ Groats, we were so annoyed that we dumped ourselves in the cafe for hot chocolates and scones. Over the years, John O’ Groats has gradually become more and more touristy – I remember when there were a couple of little shops totally unrelated to tourism, and that was it. Now there are several souvenir shops, craft shops, jewellery shops, cafes and restaurants, and I’ve actively avoided them.

This time, we picked out the nicest looking cafe, and it was great! 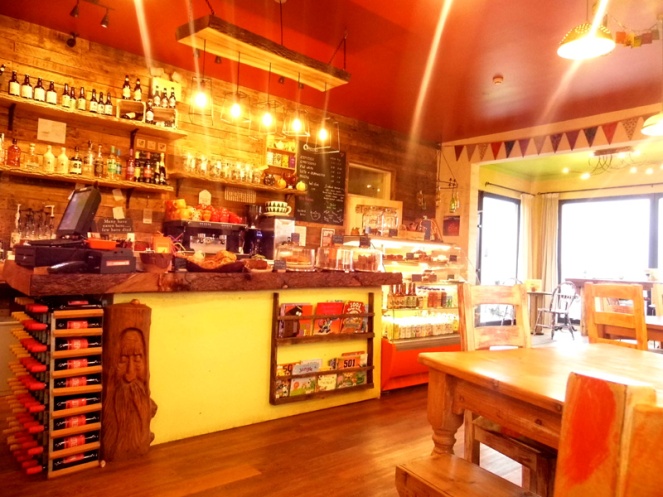 Do we recommend their hot chocolates? That would be a resounding YES!

I also wanted to get to the most north-easterly point of Britain, Duncansby Head (we did the most northerly on our way down, Dunnet Head), and while I’m sure the winding, dipping road is lovely in the sunshine, navigating it through floods was an interesting drive to say the least.

Needless to say, we didn’t even get out of the car. This is my photo of Duncansby Head, and I don’t want to go back because then this can always be my memory of it, haha!!

And on that note, it was time to go and catch our ferry. Which we were about two hours early for.

Honestly, although I had been getting frustrated by the constant threat of rain for our whole trip (especially given that the weather forecast either side of any given day was glorious, which felt like a bit of a piss-take), we had a really, really awesome time! But the last day was a bit much. I guess it added some adventure, and I wasn’t planning any hikes for this part of the trip anyway! Apart from anything else, it’s also given us lots of places to go back to.

Scotland: you are AMAZING. Don’t ever change.

Have you ever had relentless rain on a trip, or adverse weather ruining something?