When we started planning our North Coast 500 trip, I knew we needed to make a detour over to Skye.

After all, I’ve lived in Scotland (on and off) for 30 years…

…and had NEVER been there!!

When people plan a trip to Scotland, it’s as if there are only two destinations here: Edinburgh and the Isle of Skye. In fact, there’s even a meme for that: 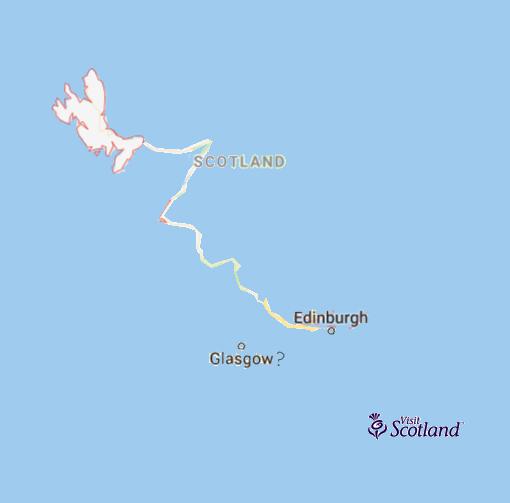 Ironically, this was pretty much the exact route we took before hitting the North Coast 500 – but in fairness, there is a very good reason for that. Edinburgh is my favourite city in the world, the route through Glencoe takes you through a large chunk of Scotland’s best scenery, and Skye, it turns out, is just as beautiful as the photos suggest.

It’s also much larger than a lot of people realise, and I knew straight off the bat that a day would never be enough time to see it all. That’s why I picked a couple of highlights and contented myself with the fact we’d miss at least a couple of Skye’s most iconic sights.

On our way up to Skye, Sam found a campsite in Sligachan, and I’m really, really glad we got to spend a night there!

Firstly, it was light when we got there. We’d finally managed to get to a campsite and not pitch our tent in the dark on day 3!

It was the VIEWS.

I was thrilled that we had barely even begun our Skye adventure, and we were already surrounded by mountains.

Not only that, but we’d passed an old stone bridge before turning into the campsite, so of course I wanted to take a wander over to take some photos.

Honestly, I could probably stay at this campsite for two or three nights and still happily be exploring this one area of Skye THAT I HAD NEVER EVEN HEARD OF.

The following morning, we drove north to Portree, the winding roads snaking around the mountains – but although they were winding, I was really surprised that we hadn’t encountered any single track roads yet. In fact, the only single track road we drove on in Skye was the one leading up to the Quiraing – so while I’m sure Skye does get horrendously busy in the summer, the roads weren’t as bad as I thought they’d be, considering all the stories I hear!

We whizzed through Portree as we’d be stopping there on the way back, and headed straight to our first stop of the day.

We got to the trail head for the Old Man Of Storr pretty early – around 9am, I think. Parking on the side of the road was easy, but you have to pay (welcome to tourist land).

I was surprised by the number of coaches there. The Old Man Of Storr is one of the most famous views on Skye – but the famous view is a two hour hike at best. Surely the coach trippers weren’t doing a two hour hike? But otherwise what was the point?

We’d been on the trail for probably about ten minutes when we reached a large mound that all the tourists were clambering onto for their photos. I looked at my friend. “This can’t be the viewpoint,” I said.

It wasn’t. If I’m honest, not really worth the stop either.

We shrugged and carried on – but after our strenuous hike in Glencoe, we were starting to wonder if we were up to a two hour ramble.

The Old Man Of Storr hike isn’t difficult at all – in fact, in any other scenario it would have been a breeze, but our legs were feeling it half way up! We powered on though, because we knew it would be worth it.

I was thrilled that the whole way up, there had been patches of blue sky. Sadly, this was the last photo I took with any indication of blue skies. Just as we reached the rock stack where the best views are, it completely clouded over. Not that I can complain – the views were still simply stunning.

In fact, you could say that the views blew me away – because it is windy as all heck up there!! The entire hike had felt sheltered, but the second we stepped onto the mound, it was (as we say in Scotland) blowing a hoolie!

There’s a good reason this hike is so popular – and I absolutely recommend it, even if you’re not a hiker! It’s not tough, but it can be steep in places. But we saw people from all walks of life on the trail, and you don’t need to be particularly fit.

By the time we got back down to the bottom, the road was packed with parked cars. I definitely recommend getting there early(ish) for this one!!

The Quiraing was another hike that I had planned, but after our Old Man Of Storr jaunt, we decided not to. The thing is, the views look absolutely sensational, but the whole hike is estimated to be 3-4 hours (so potentially double what we had just done) and I wasn’t sure how long it takes to get to the phenomenal views.

On further investigation, I think to see the view over the whole valley wouldn’t take too long (possibly even a half hour round trip?!), and we probably should have just done it.

The drive up there was really fun too!

It’s all single track, which I imagine is an absolute nightmare in the summer, but we met barely any traffic, so it was fine. We did get stuck behind a cow at one point though… and the person in front of us was clearly a tourist because they didn’t have any clue what to do! It was pretty funny though (and wouldn’t be our last cow-traffic-jam of the trip!).

The main problem with deciding whether to do the hike was, it started raining as soon as we got up there. We decided to grab something from the snack van for lunch, and wait it out to see if it stopped. Instead, the clouds rolled in even more and we figured even if we did do some of the walk, we might not get the views anyway.

It’ll have to wait until next time.

We almost completely missed Kilt Rock. In fact, the only reason I realised it was there was because after we’d gone past the turn off and I’d sailed round the corner from it, I noticed a car park in my rear mirror. But there had been no signs, and the road hadn’t even been obvious. I only guessed that that was what the car park was even for because I knew Kilt Rock was supposed to be in that rough area.

And so it was that we popped in to see the gorgeous cliff waterfall with a “kilted” rock backdrop on our way back down instead.

We also discovered that this is where they found some dinosaur prints – I remember seeing the news stories a few years back, but didn’t know they were at Kilt Rock!

When I worked in the hostel in Kirkwall, the manager from Portree’s hostel came to stay for a few days. She pointed out that Kirkwall is much, much bigger than Portree, and I was surprised. After all, so many people go to Portree, and I figured that an island bigger than Orkney would have the “capital” to match.

Well, it turns out Portree is tiny.

It’s only really a few streets, and although it’s pretty, there’s not exactly a lot… there. I guess Skye is more about getting out into nature, but I think it just surprised me that such a famous town was barely bigger than the village I grew up three miles from.

Anyway, it’s quaint and cute and we enjoyed a little wander. I’d planned to stay longer and have lunch there, but it was late in the day by now anyway and I was glad we’d grabbed something up at the Quiraing.

There’s plenty more to do on Skye of course, and we only saw the eastern side of the island.

I am really, really glad we went to Skye though, even it was the briefest of visits! I’m just so glad I’ve finally made it there! I was worried that Skye would be overrated – especially as I’m from an island – but I don’t think it is. I really enjoyed it.

So yes – Skye is well worth a visit, and its accessibility makes it even more a popular choice, but please also remember there are so many other great places to see in Scotland!

Saying that, obviously I’ll be back. I didn’t even see the infamous Fairy Pools (is it bad that I’m actually not that bothered about them…?) or the Neist Point lighthouse. Ash has still never been. So all signs are pointing back to Skye!

Have you been to Skye? Did you love it, or did you think it was overrated?