This is going to be one of the hardest posts I’ll have to write, which might explain why it’s taken me so long!

We arrived in Cambodia having heard story after story of people being mugged, people having their bags slashed from their shoulders by passing motorcyclists, people having everything taken from them during a tuk tuk ride. One girl we met had her bags stolen TWICE.

So when the morning bus was fully booked and we had to book the lunchtime one which would get in to Phnom Penh in the evening, we were more than a little apprehensive. To make things worse, we waited for hours at the car ferry crossing, and then 10 minutes outside the city we broke down outside a Cambodian wedding – which I was tempted to crash!

Finally at 8pm we rocked up somewhere in the Cambodia capital, and thankfully we had just seen the road our hostel was on. As we stepped off the bus we were hounded by tuk tuks, to which we told them where we were going and they laughed and sent us on our way. Phew.

And our hostel was AWESOME. After lugging our cases up 3 flights of stairs, that is. Our dorm was like a maze of 20 beds in different rooms but no doors between them. We were settled in the back of the dorm with 4 beds, and even though our room was next to the very lively bar, we didn’t hear a thing unless the main door was open!

And so began some great nights after very heart-wrenching and difficult days.

Our first day was spent with a visit to the notorious Killing Fields, some 15km outside of Phnom Penh. This is Asia’s version of Auschwitz, and although I’ve never visited, I honestly imagine this to be worse. 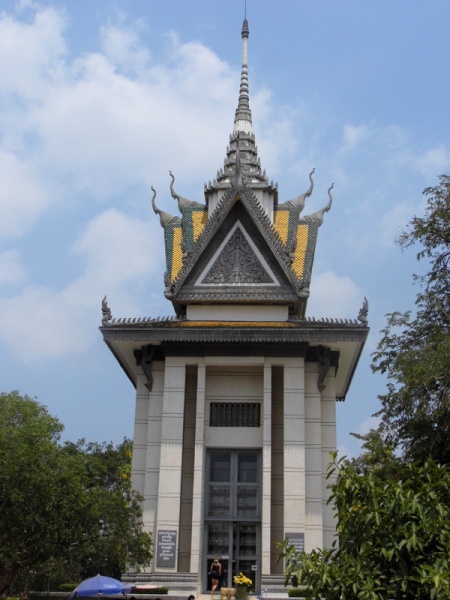 The so-called killing fields (now called the Choeung Ek Genocide museum) is a burial ground that originated as a Chinese cemetery – until a quarter of the population was massacred under the Khmer Rouge regime. Here lies the biggest site for the killings, though there are many others all over Cambodia.

Every sign along the trail is a sombre account of what happened during those years in the 1970’s. People were brought here blindfolded, truckloads at a time, to be lined up and killed. Others would be kept in a barn until it was their turn. Women were raped and beaten. They even used cheap tools to do the job – anything they could find – because the people weren’t worth killing with anything valuable, and gun shots would attract too much attention.

Every sign made me want to cry (particularly the “do not step on any bones” ones…). The injustice these people suffered is beyond anything I’ve ever imagined. We don’t get taught about this in school!

However, by far the hardest part of this place to contemplate is a tree covered in bracelets, known as “the killing tree”. Babies and children were killed against this tree, usually in front of their mothers before they were murdered themselves, and it’s the worst thing I can imagine. And so I was glad to see the “music tree” nearby – it must be a little more cheerful, surely? Nope. This was used to play loud music to cover up any sounds of screaming that people nearby might find suspicious. Great.

And what was the point of this ruthless genocide? The Khmer Rouge came to power with the belief that everyone should have equal rights, which in a building economy where some people worked in the cities and others remained in poverty-stricken villages, gave leader Pol Pot the idea that these privileged people must be killed. This included doctors, teachers, business men and anyone with links to the previous government. With this going on behind the scenes, Pol Pot was so paranoid that everyone was in fact betraying him that he would then kill anyone as a traitor just in case. Of course, if he’s going to kill someone, he’d better get their whole families killed too so that there is no chance of revenge.

We were shocked to learn that the UN continued to grant money to Pol Pot and his regime years after these events – even once the story had been outed. That someone could be responsible for the worst cruelty of humanity and be rewarded for it? That makes me sick to my stomach, even more than the fact no one knew any of this had happened until years later.

And yet look at Cambodia now. A quarter of their population disappeared in the space of a few years, down to 6 million people. Now, there are 15 million. And they are all happy. They all forgive Pol Pot for his horrific actions.

For a nation to have experienced true tragedy and still be at peace with themselves and everyone around them – that speaks volumes. And, despite everything I had been told (and sure, Cambodia isn’t perfect and you CAN be scammed or robbed), it really shows when you meet them.

Hellooooo! Well, ironically I ghosted you all after my last post promised to bring you some more Dubrovnik goodness!
Woah Insta! It's been a while. Pretty much a month in fact.
Mostar was one of my favourite places in the Balkans!
I absolutely LOVED Sarajevo.
Let's talk surprises! Starting with the fact it's AUGUST. How in the hell did that happen?
I didn't expect so many mountains in Bulgaria. I certainly didn't expect THIS. 😍😍 Rila Monastery absolutely blew me away! In fact I have a whooole bunch of photos of it which I've shared on my blog!
Who watched the Wimbledon today?!?! I have been on the edge of my seat!
Still amazed by how much I loved Sofia! Prior to visiting, I pretty much had no idea what to expect.
One more from colourful Galway!! Have a beautiful weekend! x
HAPPY WEEKEND!! It's glorious weather here in Edinburgh - perfect for a nice cold cider!
Is there anything better than colourful buildings?! I absolutely LOVED Galway in Ireland - so, so pretty! ❤
Does anyone else have an obsession with doors...??? Funnily enough they were the first thing I noticed in Dublin when we took the bus from the airport into the city - and then I saw a bunch of postcards with pretty doors on! So I'm clearly not the only one. 😂