So I just slipped off the radar for a few weeks there – the reason? I actually got a last minute job working in a country pub in the middle of the, well, country. This meant no internet apart from a little bit of data, and made it nigh on impossible to do any updates on here.

So onto the big news – we have been in Australia for a YEAR. A whole year. That’s roughly 4% of my life spent in a country that I’ve only seen probably 0.0005% of.

I’ve been to Sydney, Melbourne, Adelaide, Canberra, Byron Bay, Gold Coast and Sunshine Coast (among others), and lived in Brisbane, Mildura and Cracow (not Poland).

In that time, I’ve worked approximately eight jobs and worked 11 out of 12 months.

Here’s a rundown of what I’ve been up to in the past year:

As mentioned many times – the worst job I have EVER had. 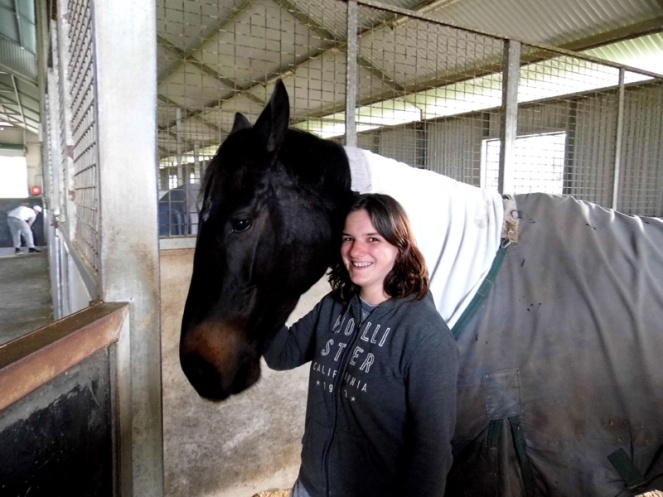 I worked as a stablehand at a racing yard while Ash did cleaning and maintenance (mostly mucking out the stables). We were up at 4am, started work at 5, and finished at 5.30pm with a three hour break in the middle. The pay for the hours was rubbish (it basically worked out at $6 an hour which even with accommodation included is shocking), and we were treated like crap every day for the three weeks we were there.

The work itself was fine. I would feed 22 horses every morning, take rugs off, take temperatures, and then they’d all go out for a ride. As they came back in, I’d hose them down, put rugs back on, and that was my morning. The afternoon was an assortment of jobs from putting the horses on the exercise walker, weighing them, grooming, etc. That was my day, and it was fine. 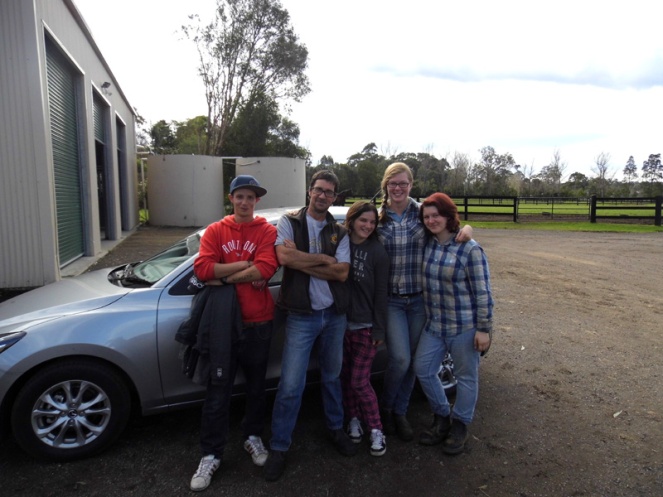 And we worked with great people. The other backpackers all kept each other sane (sort of) and the barn managers were fun (except mine; she treated everyone like they were idiots. She shouted at me for the way I put headcollars on, for goodness sake). But God forbid we have a laugh with each other. A week later, the manager had a go at the boys for never smiling. But they were shouted at if they smiled! We’d finish late some days, yet if we finished early we’d be shouted at because “WE’RE NOT PAYING YOU TO STAND AROUND.” Essentially, we were treated like children. 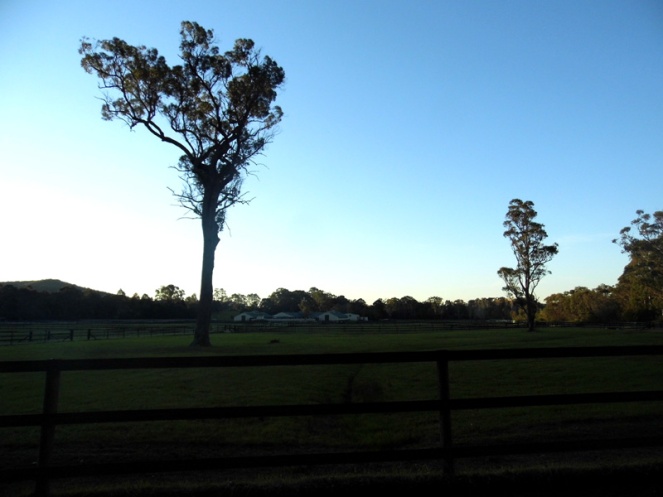 A few weeks after we left, a girl lost her fucking finger while tying a horse up. One manager told her not to cry; another immediately called an ambulance and the owner went ballistic in case he got into trouble. He was more concerned about his lax health and safety rules coming to light than the fact SOMEONE HE EMPLOYED HAD JUST LOST HER GOD DAMN FINGER.

So that, in a nutshell, sums up how horrific that place really was.

A group of us at Limitless got together and said a big fuck you to the place by leaving at the same time. We road tripped to Mildura, a town blacklisted on the backpacker trail as being a place infested with scams and dodgy farm work. 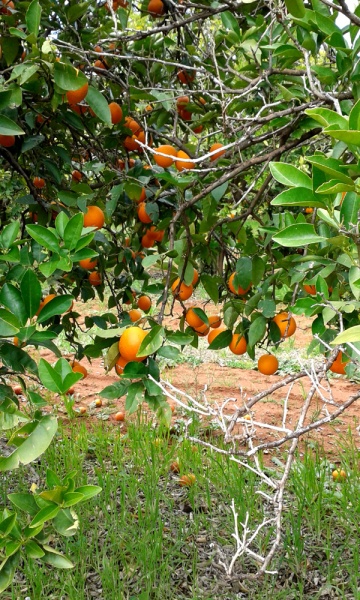 We got lucky. The first two weeks were pretty rubbish – we were pulling vines off wires and slapping ourselves with branches in the face for next to no money – but it got better and we ended up staying for almost three months. I was working a few days a week at a citrus packing factory for $15/hour, which was a pretty easy job, and in between I was picking mandarins at a couple of farms, which was shitty pay and barely even worth it. (I was being paid around $75 per bin but I’d struggle to fill one bin in a day!) 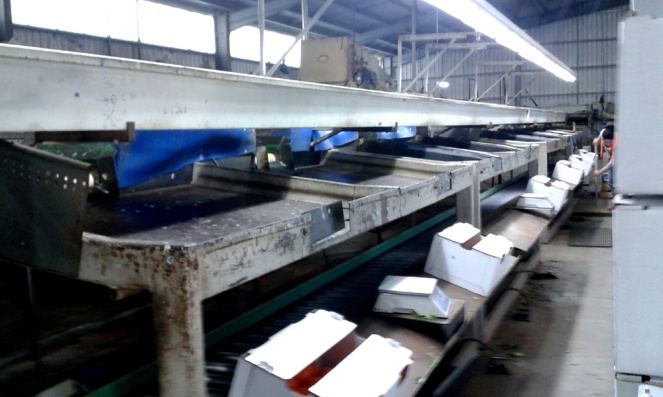 Eventually we were put on a really, really good farm just over the border in New South Wales. It was $21/hour and everyone who worked there was great. I mostly planted zucchini, melon & pumpkin seeds which was back-breaking work to start with – but I also picked pumpkins, drove tractors and became a ghostbuster. 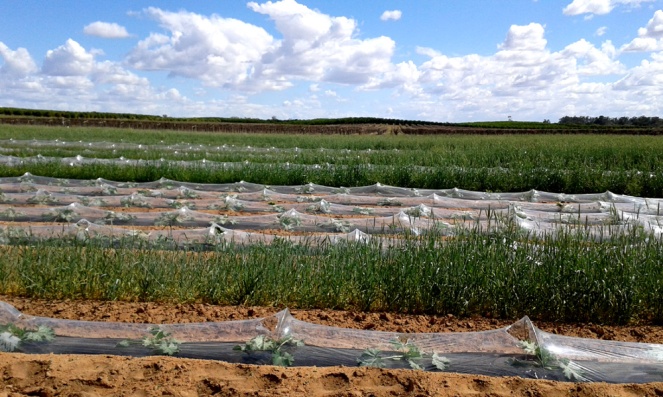 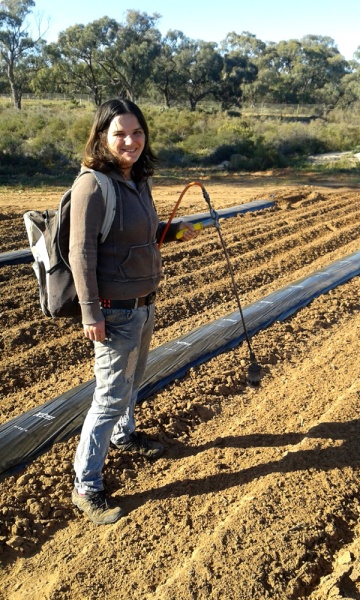 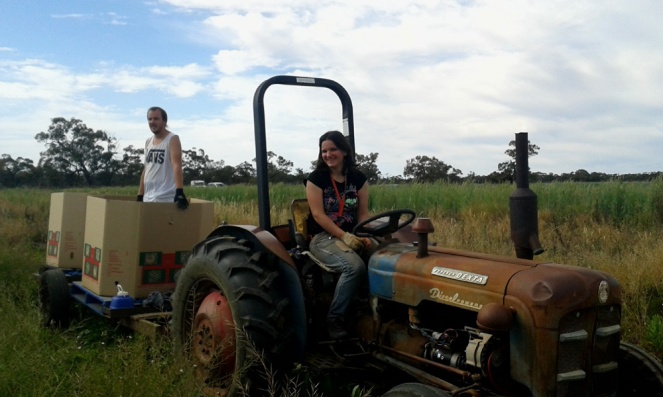 I didn’t love my farm work but I did have a pretty good time there!

As a backpacker, I really couldn’t have asked for a better job than this one! It started out with around 20 hours a week, but I ended up averaging about 40, and I stayed there for the full six months which was not the original plan. 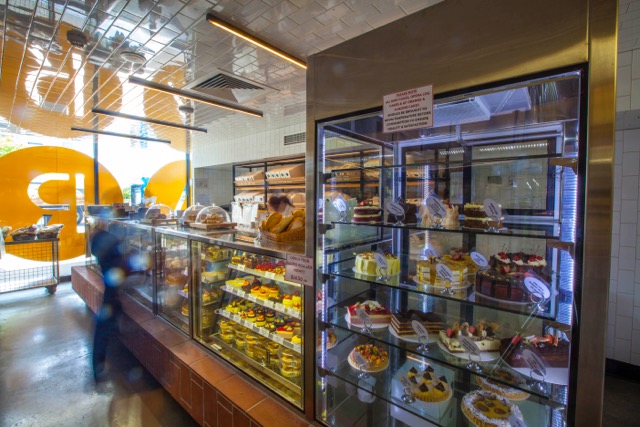 (picture from the TSMC website – the cakes ARE as good as they look!)

I mostly worked in the bakery section, packaging bread and selling pies and cakes (and doing LOTS of cleaning…!) but I was trained on registers and quickly picked up a lot of shifts there. I also served The Veronicas a few times. (I convinced one of them to buy a teriyaki chicken sausage roll! God I miss those sausage rolls.)

I worked with a really great bunch of people here, even if my supervisor did drive me nuts a few times, and I’ll miss them a lot when we leave Australia! I’ll also miss the free bread and pies. And teriyaki chicken sausage rolls! Like I said, I couldn’t have asked for a better job because I got free meals most times I worked a closing shift.

And to think I probably only got the job because the lady in HR has the same name as me!

Ash and I were both offered a job on a farm near Goondiwindi on the border of New South Wales and Queensland, which was perfect because we only had a couple of months left on our first year. They then decided that they needed someone qualified to drive big farm machinery, and we lost the job.

Luckily, I saw an ad online for a job in a country pub, and I was offered the job within minutes of applying. They were desperate for someone to start ASAP, so I upped and left Brisbane while Ash stayed to start a construction job.

And on such a whim, I have literally just had probably the best six weeks I’ve had in Australia!

I never expected to work in a pub, nor a hotel where I have to change beds or work in a kitchen. I’m not very practical, I can be hard of hearing, and I don’t consider myself much of an extrovert.

Within days, everyone commented on how much more sociable I am than other backpackers they’ve had. At the end of my time there, people said I had been there longer than anyone else. I actually enjoyed it so much, I’m planning to go back!

I mean, for one thing, look how cool it is! 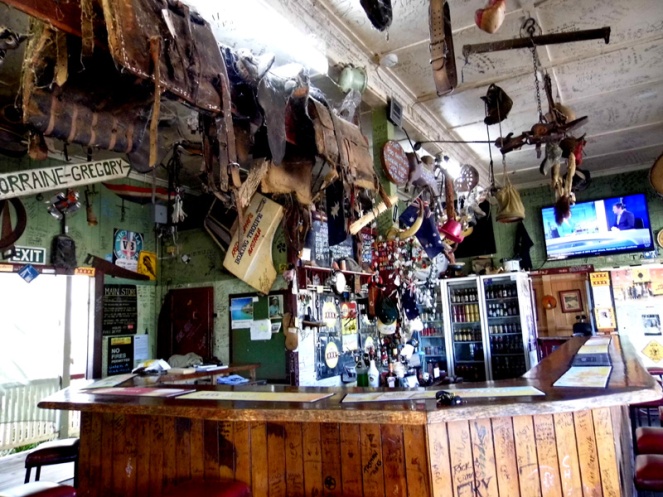 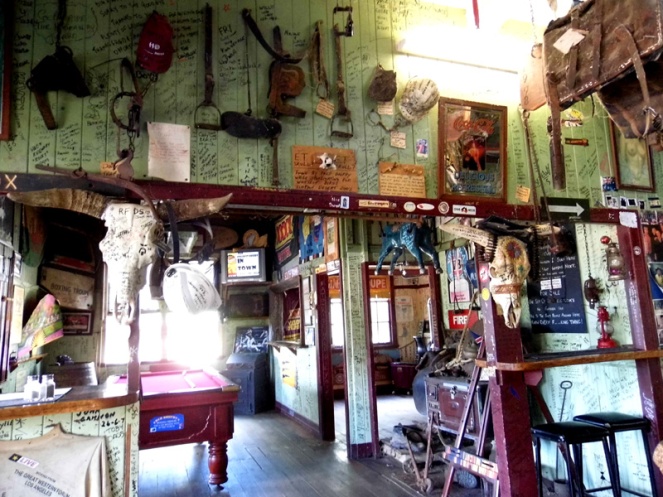 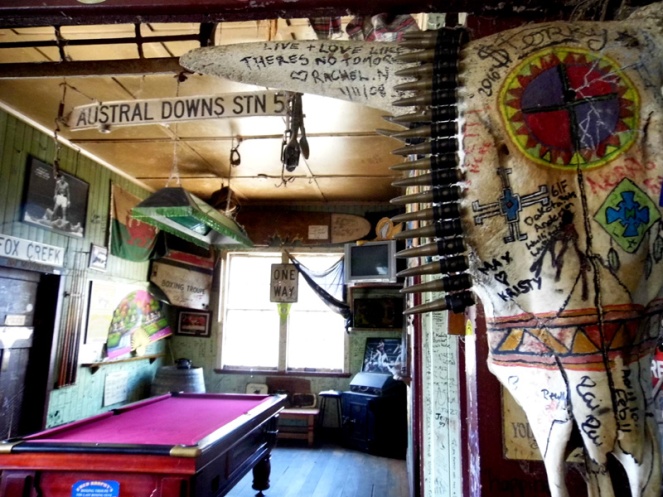 It was super relaxed, for the first couple of weeks I was averaging six free drinks a night, we had some great movie nights, nights sat around the fire, one evening we ended up at a guy’s farm and I have NEVER, EVER seen such a bold night sky (sadly I don’t have a camera good enough to pick it up!). I rode on a quad bike, the back of a dirt bike, I drove the ute (pick up truck) and broke down in the middle of nowhere. I saw a snake for the first time. I learned how to plait leather and made my own belt. We almost always had rock music on the jukebox. I worked out how to get free songs on the jukebox when no one else could. We were surrounded by puppies. I was given great pub grub every evening. I even got better at pool. And I was being given money for it. 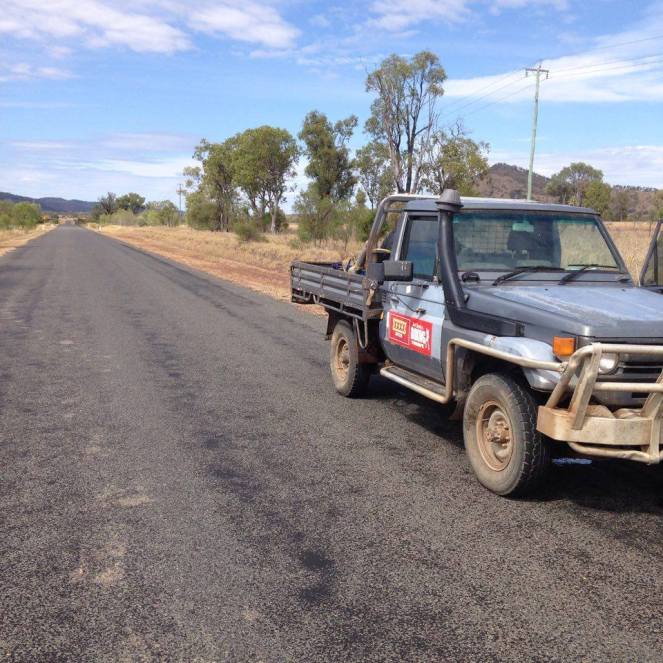 And some of the characters I met are people I will never forget! Cracow is a mining town so most people who come in are either miners or farmers – then there’s the guy who can drink three bottles of rum and never gets drunk. 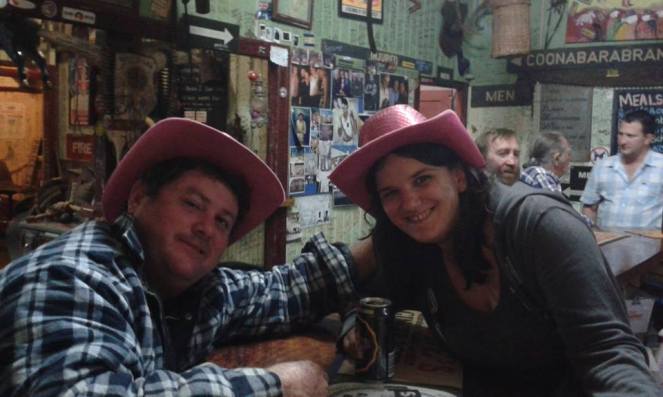 That’s this guy, by the way. 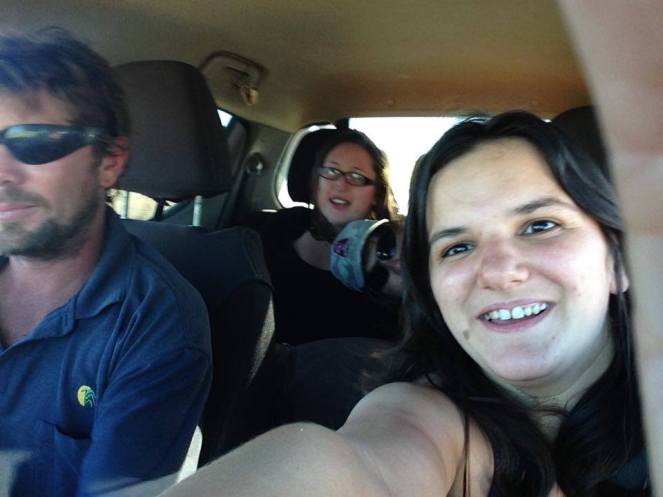 Here’s a bunch of us driving back to the pub for work after an all-nighter. All lookin’ good.

Working out in the country is one of the absolute best ways of saving money (I was paid weekly with accommodation and food included, which is most common for these types of jobs), as well as giving a “real Aussie experience”. I loved it!

And here’s a list of things I never thought I’d do over the past year while being paid:
– crack 200 eggs
– flick redback spiders off pumpkins
– not even flinch while doing that
– drive a tractor
– paint someone’s verandah
– work behind a bar
– work in a kitchen (seriously, it’s embarrassing how bad I am with food)
– receive six free drinks in a night (or more)
– hose down 25 horses in one morning
– work with racehorses at all
– meet The Veronicas
– make gelato ice cream from scratch
– get better at pool (only slightly, mind you)
– ride on the back of a dirt bike (okay I didn’t do that for money)
– carry many, many $40 cakes and never drop one

It’s certainly been an interesting one! And now we are back in Brisbane after a really totally awesome year, ready to fly out to New Zealand tonight!! We’ll be back in Australia in three weeks to travel, but I am hoping to post some updates as we go. 🙂

8 thoughts on “A Year Working In Australia: An Overview”