I hold an unpopular opinion…

…I’m not a huge fan of Portland.

There, I said it. I can’t believe it, either. After everything I’ve heard, even the slogan, “Keep Portland Weird”, I felt like I was going to love it. There was no way that I couldn’t.

But after a walk around the (pretty small) city centre, we weren’t feeling any sort of atmosphere. We weren’t seeing the quirks that make Portland famous. Instead, we were passing homeless people and fairly run-down buildings, and so I decided we should make a beeline for the waterfront… where there was no charm whatsoever. I quite liked the “Saturday” market which runs on Saturdays and Sundays, but as soon as we started walking away from that, it all felt downhill again.

Surely we were missing something? I don’t think I’d ever heard anything bad about this city.

We headed to Powell’s City Of Books, the largest independent book store in the world, and immediately fell in love – we could spend hours in there, and indeed did exactly that the following day when we gave ourselves some downtime to catch up online and charge our stuff (and buy some books that we totally can’t fit in our suitcases/backpacks, and a Rick & Morty game, and a stupid checklist book, and postcards… errr!).

It is amazing and huge (four floors spanning an entire block in all directions, in fact) and totally worth the hype. 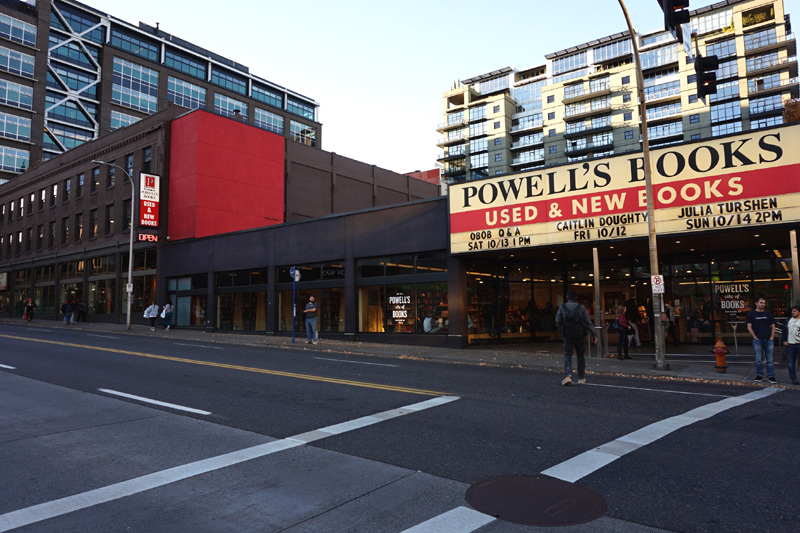 My favourite part was the entire banned books section, which included things like Battle Royale and Catcher In The Rye. It also contained Game Of Thrones, which piqued my interest and I was surprised to read this cited as the reason… 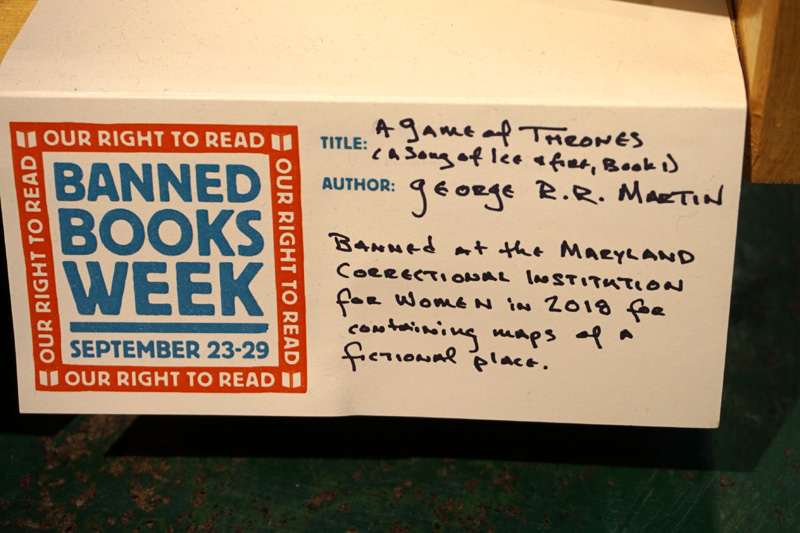 All that debauchery and death and shenanigans, and they ban it for THE MAPS!

But a book shop can’t save a city from itself, and I was frustrated that we couldn’t click with it.

I did also eat a doughnut (spoiler: I may have had more than one), because we were in Portland and you can’t visit Portland without eating a doughnut. I think that might actually be the law. We parked up close to Blue Star, and I tried the raspberry & rosemary one, which was both colourful and delicious. I was also tempted by the blueberry, basil & bourbon one (and the maple bacon, and the passionfruit cocoa… in fact, just give me them all and I’ll be happy, and probably fat). 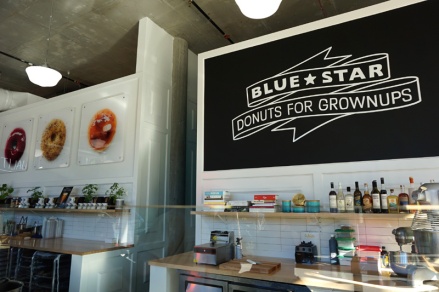 We also found an arcade bar called Ground Kontrol that we’d heard of, and Ash was in heaven.

Dinner was a hard choice because everyone knows that Portland is a foodie city and we wanted to do it right. I’d shortlisted about 10 places, but we ended up at a cute place that wasn’t even on my list called Thai Peacock and had absolutely delicious food (I feel like you’d have to be pretty unlucky to have food in Portland that ISN’T delicious!!).

Slowly, we were starting to warm up to these certain places, but it wasn’t enough for us to love the city as a whole.

The next day was a lazy one, for the most part, but I did have one thing left on my list: the Freakybuttrue Peculiarium. Not a museum. A Peculiarium.

We totally walked down the wrong street to get there, but it was lovely and residential, and I saw my favourite house that I’ve ever seen in my life.

We also stopped at Elephant’s Delicatessen, which I’d read is a fantastic stop for lunch, and with a name like that I didn’t doubt it. Let me tell you – it is amazing! There are separate counters for different types of food, and the deli counter with pasta salads etc had so many options I couldn’t choose. Luckily, even though they charge by weight, you can get a plateful of various things, so I ended up having a few things loaded onto my plate. 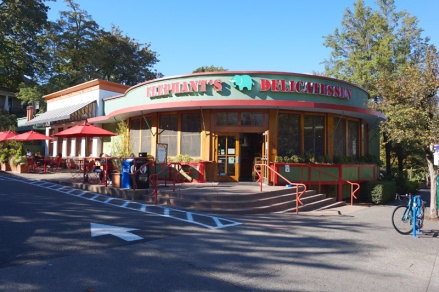 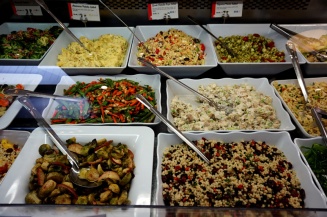 As expected, the peculiarium was absolutely ridiculous. 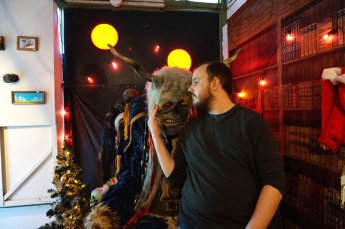 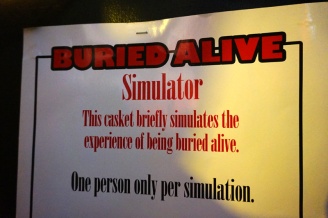 If we were going to take anything away from Portland, this was it!

After this other-worldly experience which turned out to be the best $5 we’ve ever spent, I realised there was an ice cream place I really wanted to try down the NEXT street back towards town. That would be 23rd Avenue.

And that’s where we found it. 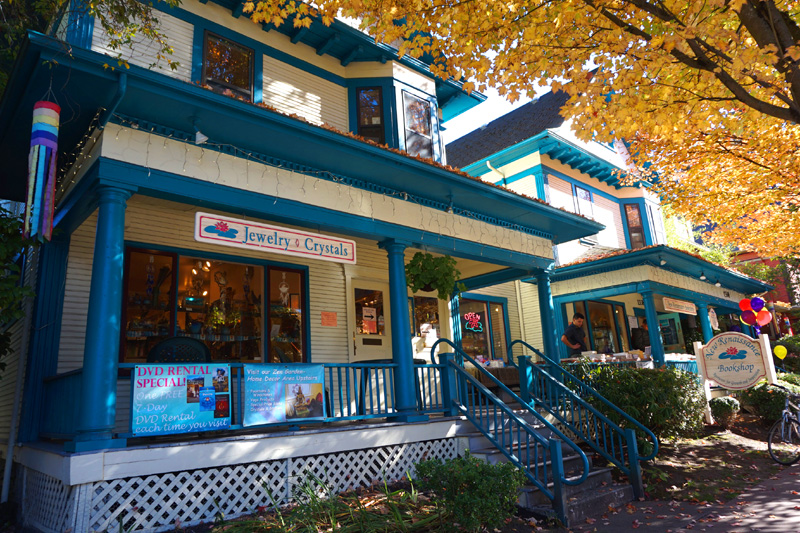 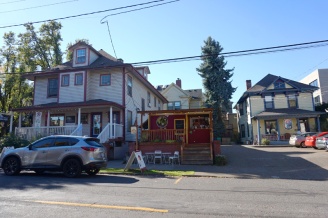 Portland’s heart, beating alive and well in the northwest district.

We found what we’d been missing because this is one of my favourite streets that I’ve ever just stumbled across, and I’m betting you they’re all over Portland. 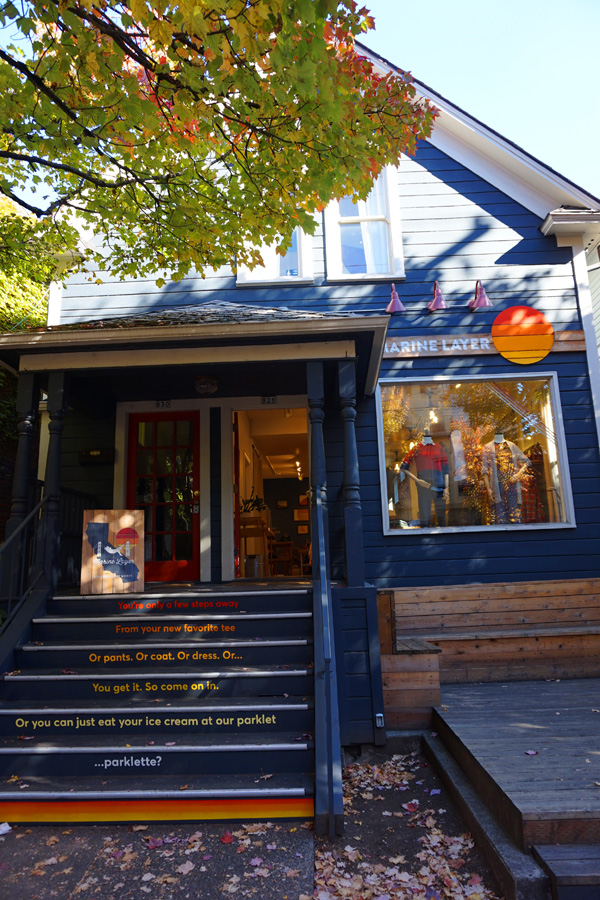 Every single shop, café and pub was housed in… well, a house! It was such a cute neighbourhood, I kind of didn’t want to leave.

I also had delicious ice cream from Salt & Straw, so that was well worth the unexpected detour too.

And so, suddenly, we were sad to leave without exploring more neighbourhoods, or even just more of Nob Hill (yep, what a great name!).

But of course, I couldn’t leave without another doughnut, and obviously that meant a visit to Portland’s renowned institution: Voodoo Doughnuts.

We got there and I was shocked: there wasn’t a queue. Was I one of the few people in the world to experience this? I mean, there were about five people queued inside, so technically there was a queue. But not the crowds that we had passed the day before.

Plus the famous voodoo doughnut is only $3!! I actually way preferred the Blue Star one, and if I go back to Portland I’ll definitely be returning to try more of theirs, whereas I might skip Voodoo. But it’s well worth a visit anyway!

So it might have taken a while, but it did feel like we were finally starting to “get” Portland. We were finding its quirks and finding its awesome. 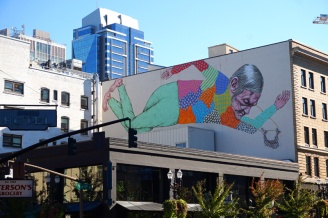 On our way out of the city, we had to stop in Wilsonville, because I’d discovered this totally crazy café. It actually turned out to be a pub, but it’s called Wanker’s Saloon Café and obviously we had to visit for the hilarity.

It was even better than I expected. 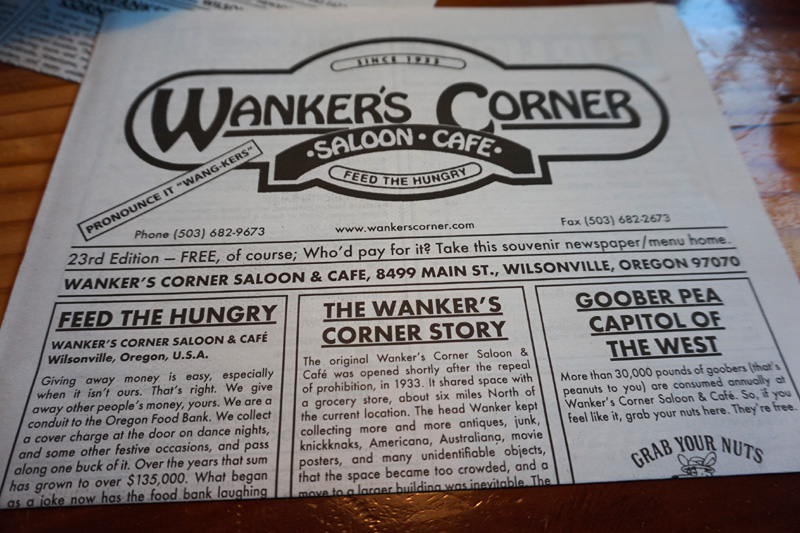 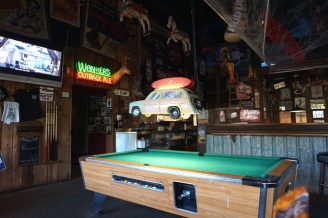 The place was actually genuinely really cool, and the funniest thing was, our server had NO idea what a wanker is. I think we blew her mind.

Anyway, we decided to have some food, and my chicken tenders came with “WANKER’S DIP” (!!!!) and we got to keep the menu (the newspaper above). My favourite part was an ad on the front for jobs… simply saying “ARE YOU A WANKER?” Absolute gold!!!

I’m so happy that I happened across it, and it marked a great end to our crazy, wacky couple of days.

Sorry I doubted you, Portland. Until next time!

⭐ The Perfect Day(ish) In San Francisco
⭐ Yosemite In A Day: All Of The Incredible Views In Yosemite National Park
⭐ Hiking Angel’s Landing In Zion National Park
⭐ Antelope Canyon and Horseshoe Bend: The Gems of Page, Arizona
⭐ Finding The Weird, Wonderful & Awesome: Driving From LA To Las Vegas
⭐ Ticking Off A Bucket List Road Trip: Driving Highway 1 & Big Sur
⭐ Hikes, Sunsets and a Crazy Camping Adventure at the Grand Canyon
⭐ That Time We Were Trapped In Monument Valley
⭐ Arches National Park and a Surprising Stop In Moab 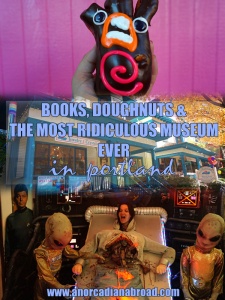 12 thoughts on “Books, Doughnuts & The Most Ridiculous Museum Ever In Portland”