Everyone’s heard of Australia Zoo – founded by Steve Irwin’s parents, it became as legendary as he did, it’s one of the biggest tourist attractions in the country, and it’s near the top of my to-do list in the land down under.

There are several other wildlife parks and sanctuaries here that have crept up onto my list too; holding a koala has always been on my bucket list, and now that we’re settling down in Brisbane for a while, it seemed like a perfect time to visit the lesser-known Lone Pine Koala Sanctuary.

Home to 130 koalas, this place also cares for wombats, tasmanian devils, kookaburras, dingoes, cockatoos, crocodiles, snakes, PLATYPUSES, and a ton of kangaroos. You’ll even see other wildlife roaming the place such as water dragon lizards (they’re so relaxed around people that you can stroke them!!) and marsupial possums (see my Melbourne post for how cute they are!).

One of the biggest selling points for Lone Pine is that you can hold a koala – but it had me at platypus too, as it’s one of the few places you can see them! It’s also a great sanctuary that rehabilitates animals, and all proceeds from ticket sales and photo sales go towards their work.

We ended up getting there pretty late in the day – the bus timetable lied and we didn’t leave the city centre until gone midday, getting us in at almost 1pm. However it turned out that although there’s plenty to see, the sanctuary is tiny and we still had loads of time to see everything, including all the feeding sessions!

We also got to hand feed kangaroos for $2, which was one of my favourite experiences. Have you seen pictures of people’s selfies with a kangaroo? It’s probably from here. They are all super friendly and easy to interact with – feed them, stroke them, even lay down next to them! I’m not the biggest selfie person, but this one’s pretty unique!

Plus who doesn’t love a platypus? They’re so bizarre that they are in my top 5 animals ever. An egg-laying mammal that has bird-like features but spends all its time in the water and can’t breathe below the surface. I could have spent all day watching these guys frantically swimming in circles as if they’re desperately looking for something!

And who knew males have spurs in their hind feet to stab venom into any attackers or opponents? Yeah, I’m shocked and appalled too! This is unfortunately the best picture I got of him in a rare moment of non-circular-paddling.

One of the feeding sessions included the tasmanian devils, which was the only time we saw them awake, and it turns out that wombats aren’t little rodent-like critters.

There are also emus roaming the kangaroo park (we didn’t want to get TOO close!), and one of my favourite random moments was discovering the cockatoo that says hello as you walk past!! And then caws “bye bye” at you when you walk away!

And even though it’s not the most famous park, it’s certainly had its share of famous visitors! The wall in the general store is covered in photos of celebrities such as Taylor Swift, Mariah Carey, Pope John Paul II (!), Roger Federer, and a ton of bands including New Found Glory, Paramore and Slipknot! (I should have taken a picture of the Slipknot one as it was right next to the Pope! Hilarious) 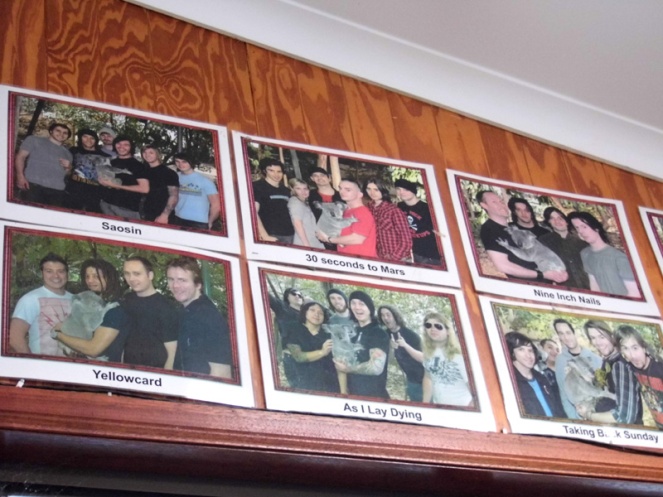 I also discovered how much I love koalas! I’d heard lots about them – “they smell”, “they’re not actually that cute”, “they’re vicious”… no! (well maybe that last one can be true, I mean look at their claws) They are ADORABLE and squishy and cute and I want to take one home! 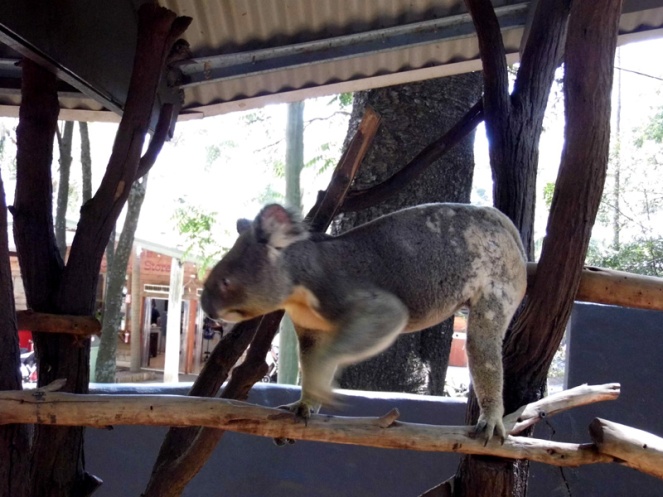 This park might not have the fame or association of Australia Zoo, but it’s 100% worth a visit!

Entry to Lone Pine Koala Sanctuary is $34 but we got tickets from Base Central for $28. A koala picture costs an extra $18 but all proceeds go towards their care and rehabilitation. Catch the 471 bus from the city centre, it’ll cost around $4 each way and takes 40 minutes.

7 thoughts on “A Day At Lone Pine Koala Sanctuary”