When we arrived in Brisbane, I assumed that the first thing we’d do as huge fans of Steve Irwin, would be to visit his legacy in Australia Zoo.

But at $59 a ticket, we decided to put it off and went to Lone Pine Koala Sanctuary for half the price instead. (you can read my write-up on Lone Pine here – it houses much more than just koalas!)

However, Tuesday was my 27th birthday (eek!) and it was decided that now is the time to finally go. 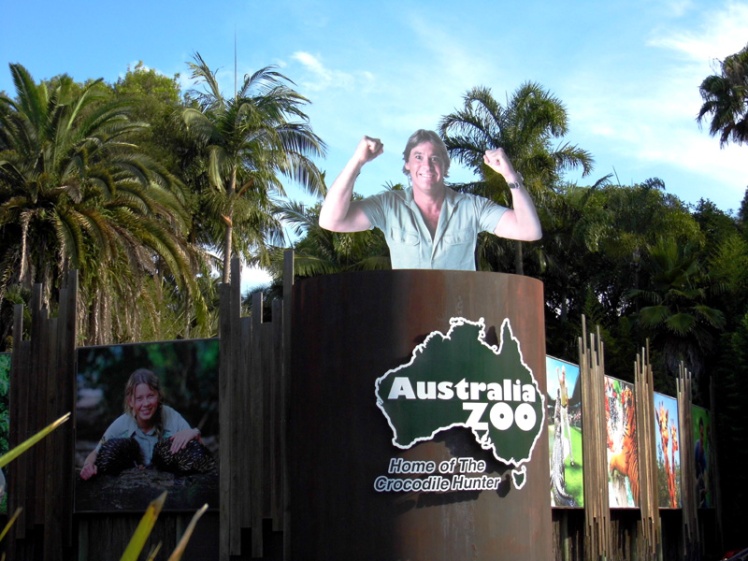 I’m a fan of zoos. I’m throwing that out there now. Not all zoos, of course. And not for the fact animals are caged in plain view of everyone, not at all – but the conservation and educational side of zoos is something I think is very important in a world of poaching and, on the better side of the human to animal interaction, rescue operations and rehabilitation.

Australia Zoo is one of the most famous zoos in the world thanks to Steve Irwin and his “wildlife warrior” work to help endangered animals (and crazy documentary antics with the world’s most dangerous creatures!) and I was excited to visit to see what he’s left behind.

So now I have a comparison with Lone Pine.

The biggest difference is the abundance of Steve’s favourite animal: the crocodile, and the show that comes with it.

The fast-paced show was probably my highlight of Aussie Zoo – it starts off with birds swooping in to the arena, including the totally mind-blowingly massive condor, with a wingspan of up to 3.1 metres. To put that into perspective, its wings stretch to double the height of me.

Then the birds disappear and there’s a ridiculously over-dramatic countdown to the crocodile bursting in. However, it’s a thrilling and interesting show, learning about the closest living creature we have to a dinosaur.

One of Steve’s ex-work mates, Wes, runs through the water to show how dangerous it is to encroach on a crocodile’s territory (which is basically any water near it). At any moment, he could slip and that would be it. While I have no doubt that Steve’s shows pulled out all the stops and were heart-stopping, this guy was still good. 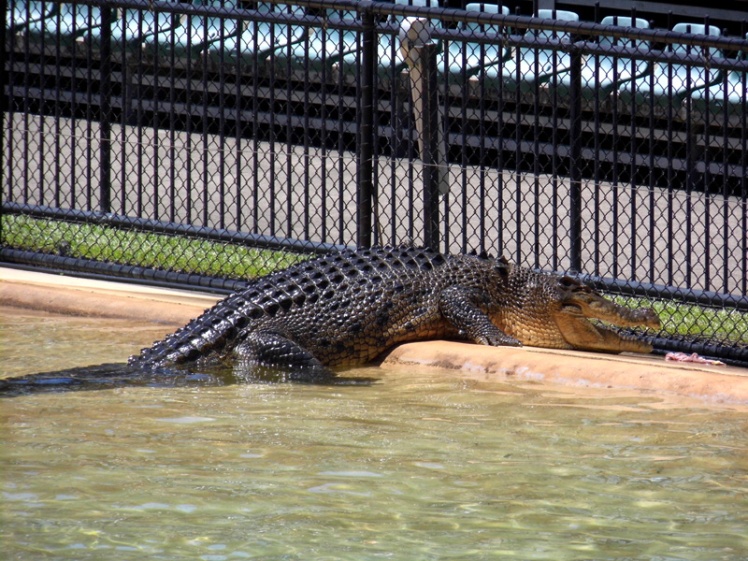 At one point, the croc decided that instead of grabbing the piece of meat, he would sit like this watching it. Unfortunately for Wes, his only way past would be to enter the water again, but with much further to run. Instead, someone on the other side had to bait the croc away and even as Wes ran along that narrow path, the croc splashed back round to have a go!

The show culminated in Steve’s children, Bindi and Robert, feeding the croc, something that apparently they’ve “never done together before” (but I’m not sure I believed that!). 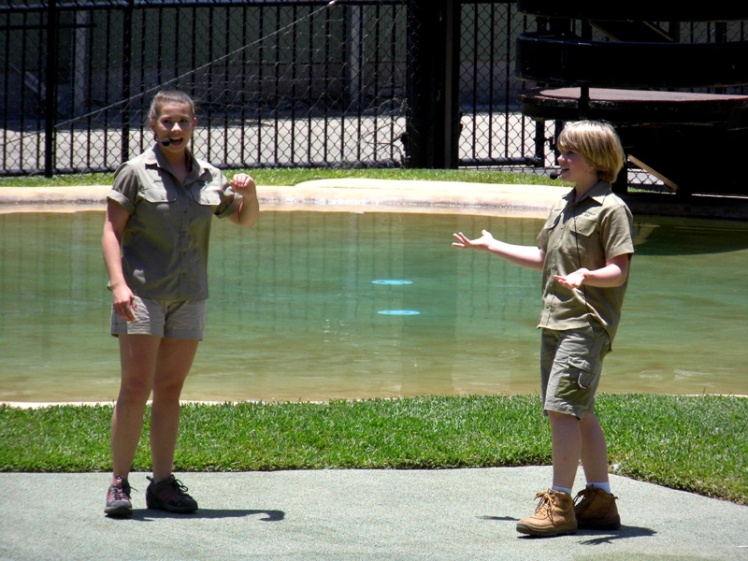 Bindi dropping the food just in time to snatch her arm back.

This, though, really was the highlight. Afterwards, we leisurely walked around the absolute clusterf**k maze of one Australian section. We saw more crocodiles, plus a Tasmanian devil, dingoes, binturongs (they are so cute! Though they should have been in the Asia area?) and a couple of the dinosaur-like cassowary birds. But even though they are all in a tight-knit area, I had to constantly check the map because we were lost!

But seriously, if you want to see why cassowaries are known as modern day dinosaur birds, check out those legs and feet!!!

Who else thought Tasmanian devils look like Taz? *raise hand*

We then headed over to “Roo Heaven” where you can chill out and feed kangaroos to your heart’s content. I kid you not, we spent ten minutes in so-called Roo Heaven without seeing a single bloody kangaroo!!

We did, however, stop at the echidna enclosure (in the middle of the kangaroo area for no discernible reason) and I learned that baby echidnas are called puggles. PUGGLES!!!!!!

Finally, at the end of Roo Heaven, we saw a whole bunch of kangaroos lazing under some trees! However the whole area they were laying in was off-limits, so we could only watch them from a short distance.

This, we all agreed, was nothing like Lone Pine – I do like that the animals have space to stay away if they don’t feel like interacting, but the ones at Lone Pine are everywhere and happy to come over. Though I did manage to get a super cute picture of a wallaby by the fence.

We moved on to the wetlands area where we could observe some pretty coloured birds, but there wasn’t a lot there. By this point we had probably been walking around the zoo for an hour and had seen, apart from the crocodiles and eventual kangaroos, less than twenty animals. Not types of animals. Just number of animals.

But we were headed to Africa, and we were pretty excited! First we had to trek through South East Asia, which contained a hiding red panda and two tigers. (No binturongs even though that’s where they’re from). I kid you not. Three animals.

It was getting hot now, and we decided to stop off on the way to Africa at the new “Bindi’s Island”, complete with amazing treehouse.

We did actually manage to catch a feeding and information session of the lemurs, which was pretty cool. But that’s just about all there was on this entire “island”. Oh wait, there were some beautiful macaws, one turtle and one snake.

So on to “Africa”. This was around a 15 minute walk from the wetlands, and we’d seen barely any animals in between. But surely it’ll be worth it.

I mean sure, if you want to see seven giraffes, three zebras and three rhinos, then it probably IS worth the walk. I AM REALLY NOT JOKING, GUYS.

Mildly disappointed, we jumped on the shuttle as there was no way in hell we were walking all the way back in this heat. We stopped by the wetlands again and took the route back to the entrance via the second (and I suppose “main”) Australia section.

THIS WAS SO, SO MUCH BETTER.

For a start, we could get up close with a sh*t ton of koalas! 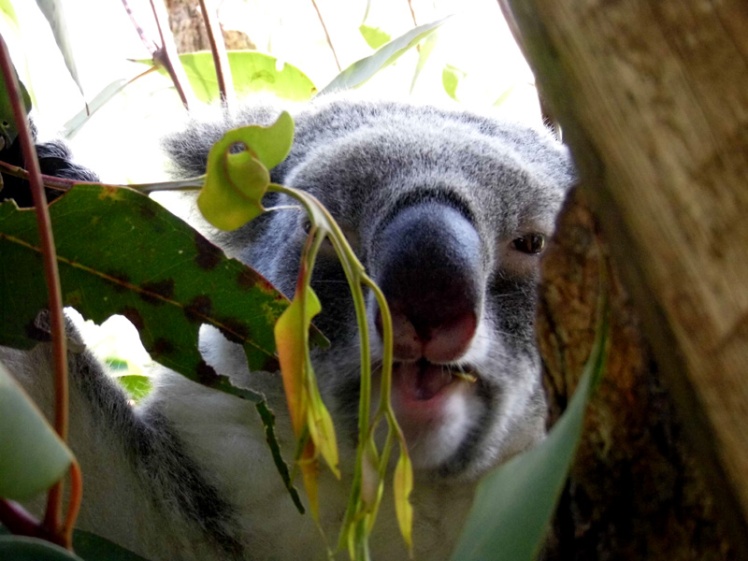 The best thing about the koalas is that the whole place feels very natural, like you’re walking through their habitat. At Lone Pine, it’s more like you are observing them in “enclosures” rather than an open habitat. It feels like they can move wherever they like in this area, which is nice.

Secondly, the kangaroo enclosure is much more akin to the Lone Pine one. Kangaroos were everywhere, and much more content with saying hello. 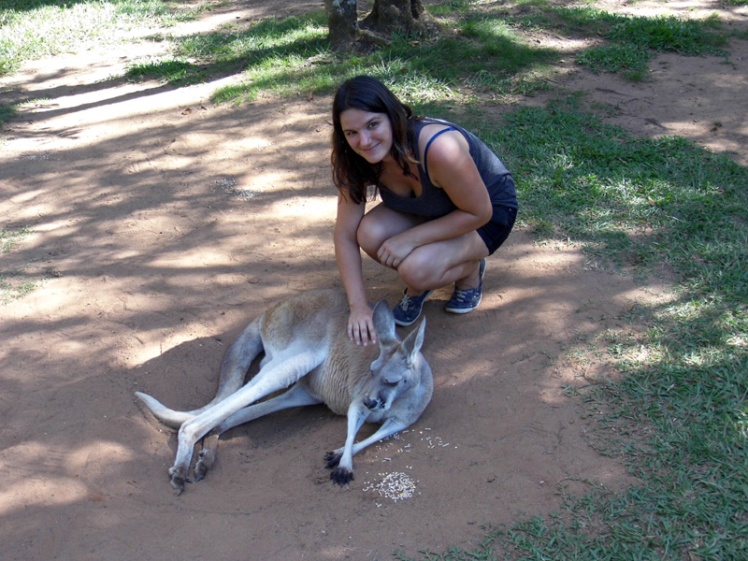 I also want to know what the hell this guy was up to! 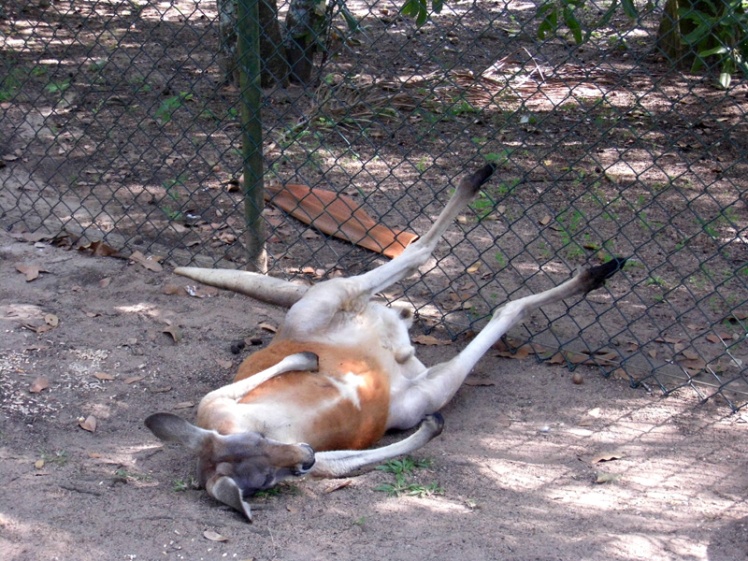 He started scratching his belly too, which made it even more hilarious!

However, while they were much more abundant in this area, there were maybe a fifth of the number we saw at Lone Pine.

Oh and of course there were the wombats, our new obsession. 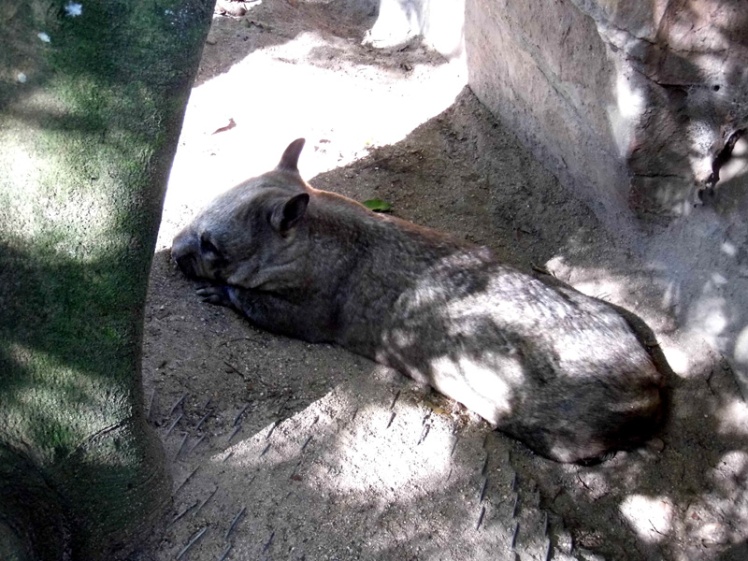 There’s also the opportunity to meet one, if you’re lucky with timing!

And finally, there was the snake house, with all the deadliest snakes as well as plenty of completely harmless ones.

What I liked the most was how much space all the animals had. The main koala walk through felt like we were in their natural habitat rather than observing them in enclosures. This was actually unlike Lone Pine in a very good way. We also paid an extra $2 to get access to the wildlife hospital and although it wasn’t that exciting, we saw some injured koalas and read their stories. I really appreciate how much places like this do for animals.

What I disliked: the layout and just how spread out the whole zoo is when it’s not even to do with giving the animals more space. There were just huge gaps between areas (especially the wetlands down to Africa) where there was NOTHING. At least Lone Pine gives all their animals space but also maximises the space they have.

Why I think Lone Pine is better 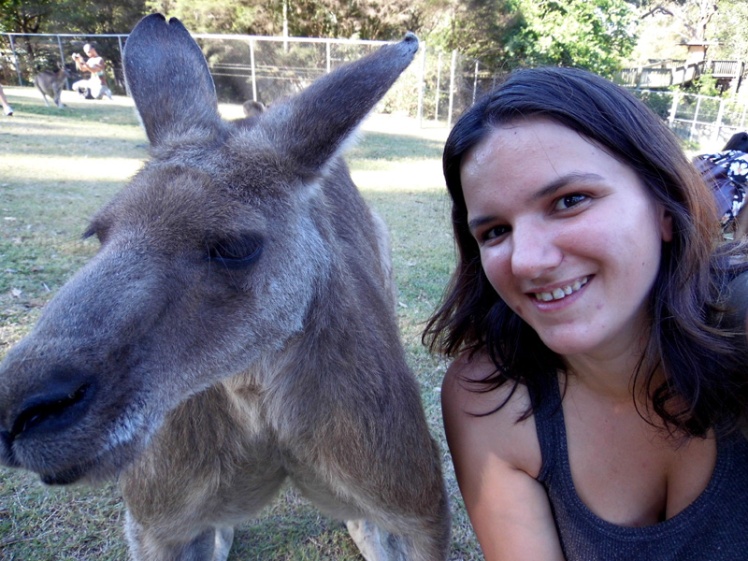 Don’t get me wrong; Australia Zoo is great and I’m so glad we went. I loved the tributes to Steve and his work, the crocodile show was great, and the second Australia section we walked through was fantastic. But there was too much walking for the amount of animals we saw.

At Lone Pine, we probably saw almost the same number of animals for half the price.

Aussie Zoo has lemurs, tigers and binturongs. And zebras, giraffes and rhinos. Okay, so Lone Pine doesn’t have any of those (but it still has platypuses!). But compared to other zoos around the world, it doesn’t hold a candle, because I’ve seen all these animals loads of times. Most people would come here for the Australian animals anyway, but why would I want to walk 15 minutes to see a couple of zebras?

But is it strange that given Steve Irwin’s affection for snakes, I actually preferred the reptile house at Lone Pine?

Australia Zoo also charges $25 for a photo holding a koala. Lone Pine charges $18 (I think this might cost more now, but you can also take your own photos for free!). And that’s after you’ve paid entry for $34 instead of $59 (we paid less for Lone Pine through our hostel too).

Australia Zoo is 100% worth a visit if you’re a Steve Irwin fan or if it’s on your bucket list (like it was on mine). But if you’re trying to figure out which one is better to visit, hopefully this will help in your decision.

What do you think? Have you been to either of these?

Tickets to Australia Zoo is $59 and occasionally there are deals on Groupon. Many tour and travel operators offer a package deal to Australia Zoo for $86 for a ticket and transport from and back to Brisbane, however you can get a train up to Beerwah for $8-10 each way and be flexible on times. There is a free shuttle connecting with trains at Beerwah. We did it this way. 🙂 Make sure you get to Australia Zoo before about 11.30am to get a good seat for the crocodile show at midday!

Lone Pine Koala Sanctuary is $34 but we got it cheaper from our hostel’s travel desk – $28 in 2015, so probably a little more now.

One thought on “Australia Zoo vs Lone Pine Koala Sanctuary”