It’s our sixth anniversary on Tuesday, so I thought I’d write a post on Ash and I’s first trip abroad together. I’d like to think of it as a poignant moment of our relationship – we actually planned it before we even got together; it’s partly what brought us together, and the band is the whole reason we even met.

We were going with other friends too – some of us knew each other through the band in question, and the others were Ash’s friends. The plan was to fly to Amsterdam to see one show; I ended up convincing Ash to come to Berlin, too!

Unfortunately my photography skills were severely lacking in places, so bear with me on this one. Ha, bear! 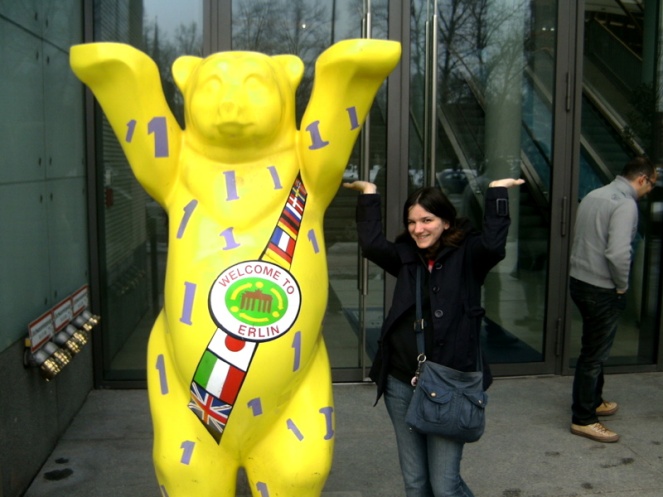 And where is Erlin anyway?

We flew into Amsterdam with two of Ash’s friends and quickly hit an obstacle – or at least, they did. After a hefty climb of a million stairs to our budget hotel (because for some reason the hostels were all REALLY expensive in comparison, or fully booked), we were greeted by a surprised owner who didn’t seem to be expecting us.

‘Ah yes,’ he said. ‘I’ve got two of you booked into one room. But definitely not four, and unfortunately we’re fully booked. Are you sure you booked it?’

It turned out that the email Ash’s friend had received was a confirmation of a request for a booking, explicitly pointing out that this was not a booking and it would be confirmed in due course. Always check your booking email, people!

The two of them disappeared around the block to find accommodation which was luckily plentiful at that time of year. They also had a million stairs to climb.

And then it was time to explore the Red Light District. I had come to Amsterdam with three guys so this was bound to happen sooner or later. And it was one of the most surreal experiences of my life.

You literally window shop. Scantily clad girls dance seductively in windows, and everything is red, and there are theatres advertising sex shows everywhere. It was fascinating and sad.

Just as surreal were the glances into sex shops and the musing over what on earth this piece of equipment does. And of course, the Condomerie, with its condoms shaped like elephants and Statues of Liberty. Because why not?

The following day was a little more cultured, although I do feel that the RLD needs to be seen to be believed.

We took a wander around downtown and visited the Anne Frank house – a sobering reminder that every page of her haunting diaries were completely real and accompanied by videos of heartbreaking interviews with her family.

Disappointingly, one of the downsides of visiting in off-season meant that Dam Square was completely up in scaffolding. You couldn’t even see what it’s supposed to look like.

Instead, we took a wander up to Centraal train station – a building I definitely need to get a better picture of one day as it’s stunning.

We were also planning to do a great canal tour that I’d read about, but on our way to the venue to see the band we got lost and couldn’t find the tour company anywhere. Finally, we arrived at the venue to see a sign for the tour almost right next to it! Clazz planning skills: nil points.

Naturally, I also took pictures of stupid signs because this is what I do best. 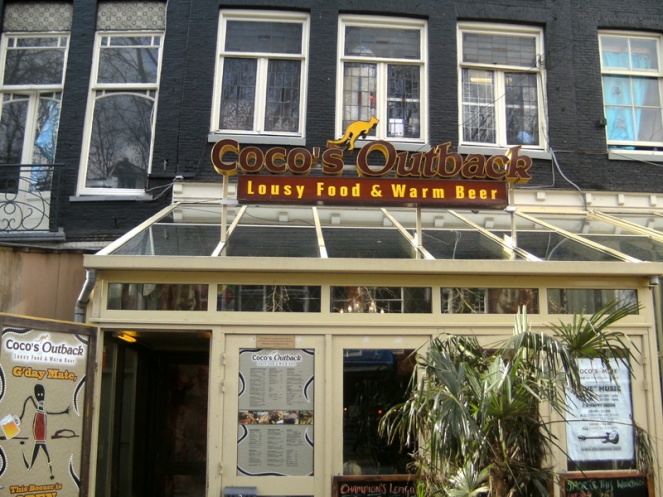 They’re really selling it to me, those Aussies.

The gig was great, and I was a little bit sad to be leaving Amsterdam so quickly. It’s a destination I’d love to visit again and explore more thoroughly, but our band were playing in Berlin the next night.

We also had to say goodbye to a lot of the friends who had come; only one other friend plus Ash and I were continuing on the six hour train ride to Berlin the next morning.

This was my first inter-country trip in Europe, and I was excited to whizz through little towns and countryside. I remember it being a pretty ride, although for some reason I have no pictures whatsoever.

I also remember two kids sitting in front of us who spent almost half of the journey leaning over the back of their seats staring at us. STARING INTO OUR SOULS. Is this normal for European kids?! I started to think they were plotting to kill us…

We arrived in a VERY chilly Berlin, having received a fresh sprinkling of snow. This was my favourite building in the city – Berlin Cathedral, or “Berliner Dom”.

But as we were arriving in the late afternoon, our exploration of the city would be put off until tomorrow. We had another gig to attend!

And it was amazing! The Amsterdam venue had been pretty big, and even being close to the front didn’t mean you were that close to the band. Here, it was more like a little club, and we got second row which meant being this close. (This is Fightstar, by the way. You may recognise Charlie Simpson of Busted fame.) It also meant that we got to chat to the band afterwards with virtually no one else around, which was awesome! It’s not hard to meet them in the UK, but to actually have a meaningful conversation with them?

The following day, the three of us took a long walk around the city, taking in Checkpoint Charlie, Brandenburg Gate, and indulging in some Jagerschnitzel (unfortunately no Jagermeister but I remember it being delicious!).

Now here comes my honest truth. I don’t know if it’s because we were there for different reasons, or if it was the cold weather, or all the walking between places, but I didn’t enjoy Berlin that much.

I do, however, feel like I need to give it another chance and explore the more trendy parts of town and delve deeper into the history and culture that made Berlin what it is today. I feel like this is a city I should fall in love with. Or at least appreciate a lot more than I did in that one day of exploring.

So while this was a pretty rushed trip and I certainly barely even dipped my toes into what these two cities have to offer, it has given me two destinations that I want to visit again. Perhaps not in winter this time!

And, well, they’ll always have a little place in our hearts, because we have a lot of fond memories with our friends (and not so fond – we slept in Berlin airport on our last night!!) and it’s where Ash and I started to get to know each other a little better.

2 thoughts on “#tbt: That Time We Went to Europe to See a Band”