We’re at the end of the first month of 2017! It’s gone quick, but I’m making a lot of headway with my 2017 challenges, so I thought I’d keep you up-to-date (this will keep me motivated too!).

Make at least £50 extra per month on “side hustles”

We’ve been pretty busy this month with my birthday, the fact my parents have gone away for a couple of weeks so we’ve been looking after the house and horses in between working, and decorating the house we’re going to be moving into.

So I haven’t had a lot of time to keep up with my surveys or money-making apps, and I’m aiming to do better next month! But I have received a £50 cheque from PopulusLive, I’m about 3 surveys away from redeeming £30 on GlobalTestMarket, and I’ve got a whole £1.50 on Qmee, ha!

At least I hit my target though, boom!

Plus I made a paltry £10 on selling stuff, which is something I’m going to be doing more of soon.

Move into a house as cheaply as possible

We’ve been slowly (actually, quite rapidly) accumulating furniture as it comes up on Facebook selling pages or we see it cheap in a local second hand store. So far, we’ve got:

Total spent: £162.80 (not bad when the only thing left that we really need is a bed and a couple more kitchen items like peelers and a bin!)

My parents have also given us curtains and a couple of spare duvet covers; and the place will come with a washing machine and fridge freezer, which is a huge help. What else helps is there are tons of built in units so we don’t need to buy many drawers or even wardrobes.

We already have mugs, glasses and even a kettle because I refused to throw out our old one as it’s cool (and you need something awesome for making tea, obviously), which has been used relentlessly during the decorating!

Overall, I’m really happy with what we’ve spent. We could have got a smaller TV but it was too good a price to pass up, and actually when I think about how much we sold all our old stuff for before we went travelling, we probably technically haven’t actually spent a penny yet (is that how it works? I dunno).

Here’s my favourite part though. I had to take advantage of the January sales for broadband, and plusnet were offering a ridiculous deal of £20 per month including line rental. I’ve paid £194 upfront for line rental, bringing it down to… £2 per month!!! On top of that, I’m getting £50 cashback. This means our entire year of broadband is just under £170. Crazy! (they’ve still got the deal on too – but only on the 18 month contracts) 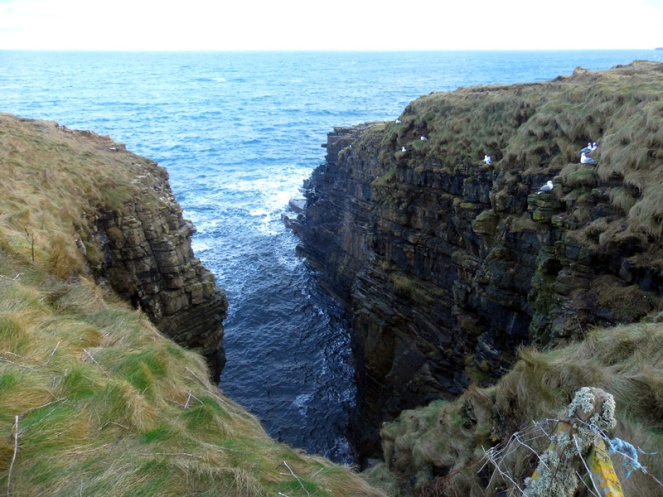 I haven’t done much on this one yet. We’ve been out for a few walks, but the weather hasn’t been great which is always off-putting when you fancy a nice coastal walk but the wind will probably send you over the edge of a cliff.

But I have been generally eating a little healthier, by which I mean we’ve had fish or chicken with salad instead of chips occasionally, and I’m eating a lot less biscuits with my cups of tea. And when I’ve had nights in with friends, we’ve bought unhealthy food from the supermarket instead of having a full-blown takeaway. Um, small steps, I guess!

The cross trainer is out of the shed though, so that’s a start…

Write for other publications

Uh oh. I’m trying not to concentrate on this too much while I have too much going on to commit to anything properly, but I’m in contact with one or two places.

I’m currently (re)reading The World According To Jeremy Clarkson as well as The Lion, The Witch and the Wardrobe. I have some really nice copies of the Chronicles Of Narnia and I haven’t read them for years (or even read all of them!) so I thought I’d break into them before I hit the library.

To help with this challenge, I think I’m going to break it down into categories, although I haven’t decided what yet. Provisionally:
10 x travel memoirs or travel adventure books
10 x fiction set in another country
10 x fiction not related to travel at all (do the Narnia books even come under this, I wonder?!)
10 x series books (there we go, a category for Narnia!)
10 x non fiction not related to travel

If you have any ideas for this, do let me know. I’d love to hear them! 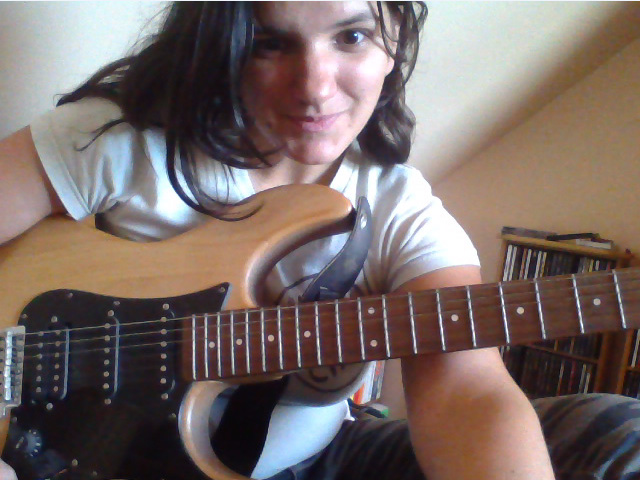 I haven’t started a course just yet, but I HAVE made head way on my “bonus challenge” – learning another language! I’ve downloaded Duolingo and I’m already 15% of the way through their German course. I’ve actually surprised myself with how much I remember from school, although I keep tripping up on the ‘der’ ‘die’ and ‘das’ and the tenses of verbs.

My favourite phrases that I’ve had to translate so far? “The children are eating insects”, “the mice are reading the newspaper” and “my bear is drinking beer again”! Oh, it’s going to be a fun course.

As for practising guitar…

My parents have been away for a couple of weeks, which meaaaans we’ve been catching up on a few TV shows! We’ve finally finished Jessica Jones and whizzed through the first season of Daredevil. Now we’re catching up with The Flash as we got a bit behind on our travels (it’s all superhero related on this one!!). Oh, we’ve also been making a tradition of watching The Grand Tour at a friend’s house, and it’s hilarious! I couldn’t stop laughing at the Finland episode where they’re mucking around in the studio. If you loved Top Gear and haven’t checked out the trio’s new show yet, DO!

We picked up a few CDs in the January sales, and at the moment Lonely The Brave’s album is on in the car. It’s excellent driving music actually, I really want to make a road trip video and use one of their songs on it! We’ve also been listening to Neck Deep a lot.

As well as sales, I’ve got hold of a few real charity shop bargains this month – including jeans, a really pretty going-out-for-dinner kinda top and a perfect little bag for nights out… for a total of £4.50! We picked up some of our kitchen utensils for between 20p and 50p, if we were buying them all new it would be amazing how quickly all the little things would add up!

More excitingly, I’ve also added to my travel plans next month!! As well as going to Edinburgh for a few days, I’ll be swinging by London, Brighton and Sussex to see friends! I cannot wait! Brighton and Edinburgh are two of my favourite places in the UK so I’ll definitely be posting about them.

The best part is, the reason I’m doing it is because I found a Megabus from London to Edinburgh for £3, which means it’s £21 return – and then the train to Brighton will be £10 return booking in advance on thetrainline!! So the adventure is adding a whole £30 to my trip – more than worth it to see friends! (and of course I’ve claimed cashback on all of it too) 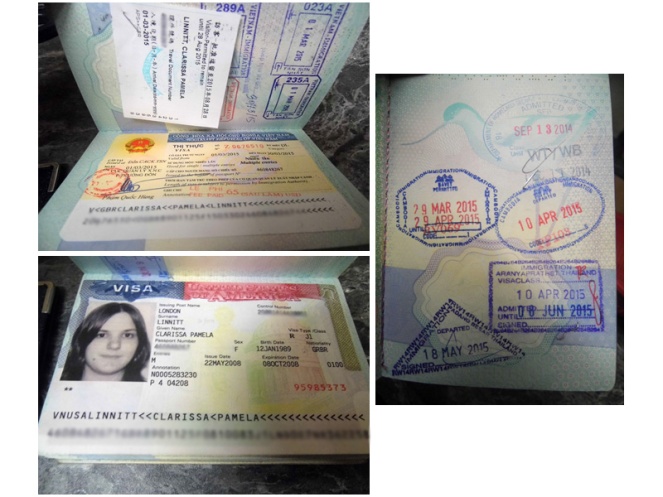 In other kind-of travel news, I sent off my passport today to be renewed! 😦 This one has had a real good run. In fact, the first thing to go in it (because we don’t get stamped in Europe) was my USA work visa when I worked at a summer camp almost ten years ago – crazy!

I’ve renewed it early in case it causes any complications with my application for the Canadian work visa, but I only just found out you can apply for it up to nine months in advance and the new one will carry on for ten years after your current one expires! I feel a bit silly not knowing that, otherwise I would have done it a couple of months ago!

That’s all my news for now. I’m super excited for my trip south next month, particularly spending a few days exploring Edinburgh properly! I normally go there in passing to catch up with friends, and although I’ll be staying with a good friend over the weekend, on my first night I’ve booked myself into one of Edinburgh’s many awesome looking hostels! Is it weird that I’ve missed the hostel life?!

Last time I stayed in one in Edinburgh (a full TEN years ago!) it was inside a converted church. This time? I’m staying in a building once owned by someone who ended up being beheaded for being involved in the murder of Mary Queen Of Scots’ husband! And I shortlisted almost ten incredible sounding hostels, it was so difficult to choose.

Hope you’ve all had a good start to 2017, even with all the political shit that continues to go on. My only real glimmer of hope lies in the fact all my friends are full of love and positivity, so that’s all I see on Facebook and around me and I’m extremely thankful for that. It’s hard to deal with the other side of it sometimes.