Belgrade was another eastern European city that really took me by surprise with its pretty architecture and funky bars and cafés. Like Sofia, I had literally zero expectations for Belgrade. It was a city that I had never planned to visit, and it was only when we arrived in the Serbian capital that I realised just how little I actually knew about it.

This was exactly why I’d booked my tour with Travel Talk. It covered an entire region that I had barely considered outside of Croatia and Montenegro, and it was a great (and ridiculously affordable) way to see all these places that I would never end up planning to go to myself. I mean, Albania? Sure, I’ve heard it’s nice, but I’d never thought of actually going there.

But apart from probably Skopje, the capital of Macedonia (now North Macedonia), the place I knew the least about was Belgrade. 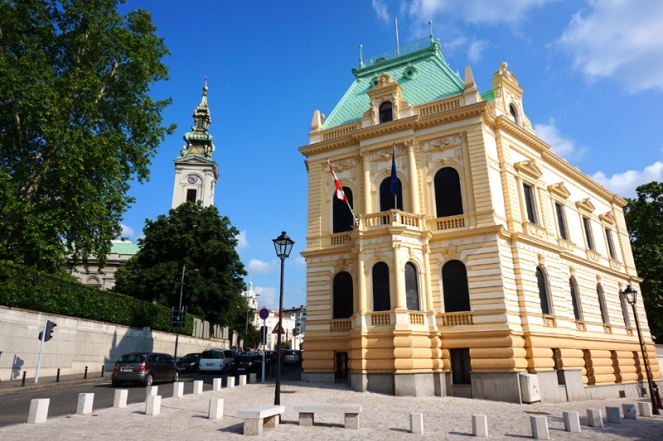 When we arrived into the city, the first thing we had our attention drawn to as we drove past was a bombed out building. This, I thought with my mouth agape, might not be dissimilar to what we would see in Bosnia.

Of course, Serbia is nothing like Bosnia, and for the rest of our time in Belgrade, we explored churches and fortresses and extremely well-kept streets which I hadn’t, if I’m quite honest, been expecting.

Our first stop was the Church of Saint Sava. Never heard of it? Me neither. 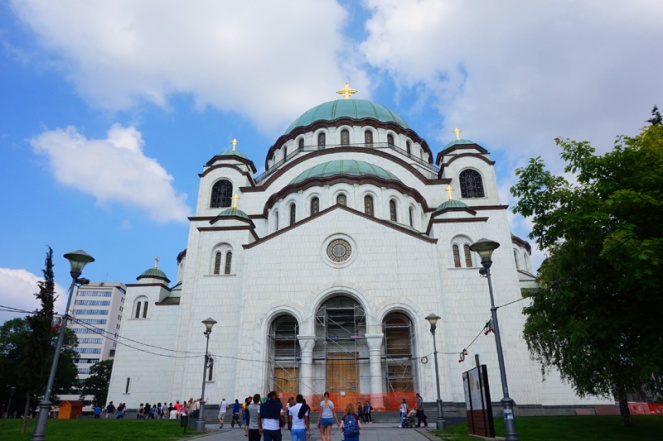 But I was incredibly impressed before we’d even set foot inside. The place is huge.

Inside, sadly, was under construction, and we headed downstairs to the crypt, not expecting all that much. 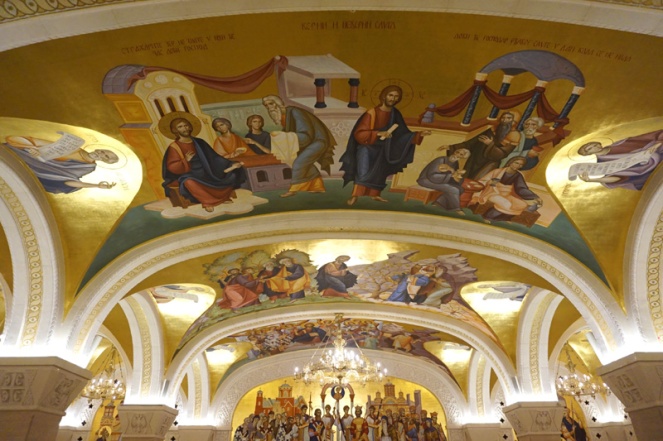 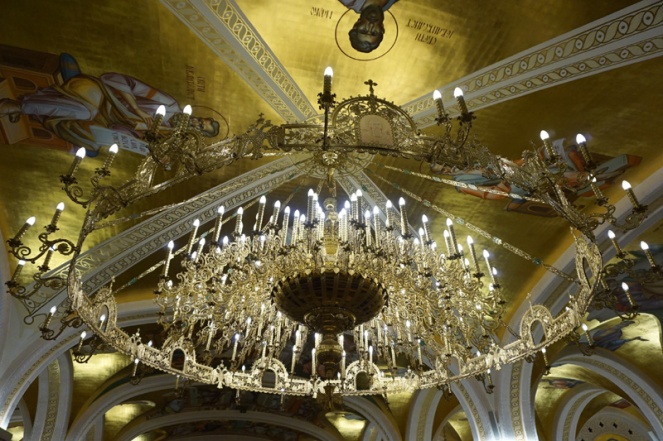 I did NOT expect that!

A short drive later, we were in the city centre on a walking tour with our guide, who is from Belgrade himself, heading to one of the main attractions of the capital: the fortress.

The fortress holds a lot of significance throughout the ages, although our walking tour was so fast paced that I missed all the information about it. 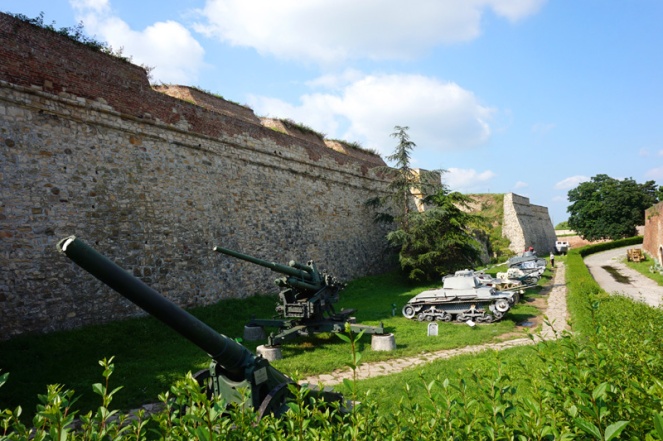 It was nice though – even peaceful, and once we were through the fortress entrance, we were faced with nature in Belgrade’s main park, Kalemegdan.

We took in the view for a while, the Danube lazily passing through Serbia all the way up to Budapest (…I mean, obviously you couldn’t see Budapest from here). It was weird to think if you followed it, you would end up there.

We were also shown the naked man of Belgrade. Wait, what?! Yeah, there’s a massive (ooh-err) statue of a naked man in the middle of the park, to symbolise freedom after the Serbs defeated the Ottoman and Austro-Hungarian empires. 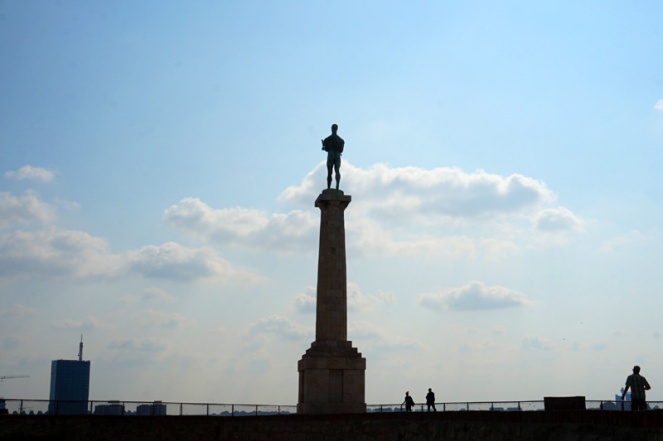 Want to see him up close? Of course you do, you dirty buggers.

After our high-speed walking tour, we were left to our own devices for a couple of hours before dinner – which meant most people headed straight to a rooftop bar.

I wanted to explore more of Belgrade’s city centre though, and luckily so did a few other girls.

What surprised me the most about Belgrade, like Sofia, was the architecture. It felt even less eastern bloc, which I found strange given that Belgrade was the capital of Yugoslavia for – technically – almost 100 years. 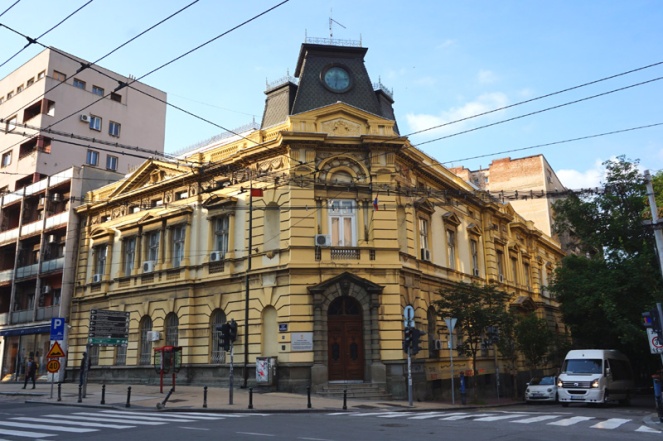 Like Sofia, there were pops of colour in places where you least expected it.

There was still brutalist architecture around, and on our way into the city, our guide had talked about how all the apartment blocks were not built for the aesthetic; they were built quickly to be small and efficient, so although he didn’t grow up in a pretty house, he had a close family in their small home. “It was hard to get away from my brother’s stinky socks,” he said out of nowhere, setting the tone for our tour. He was hilarious and completely dead pan!!

After a wander with some ice cream, we also headed to a bar – and I was happy that other people were joining me on my crazy quest!

Belgrade is actually pretty well known for its nightlife, and naturally I’d found one of the weirdest places to go: Blaznavac.

An outdoor bar with a colourful elephant, and a unicorn pulling a chariot? SOLD. 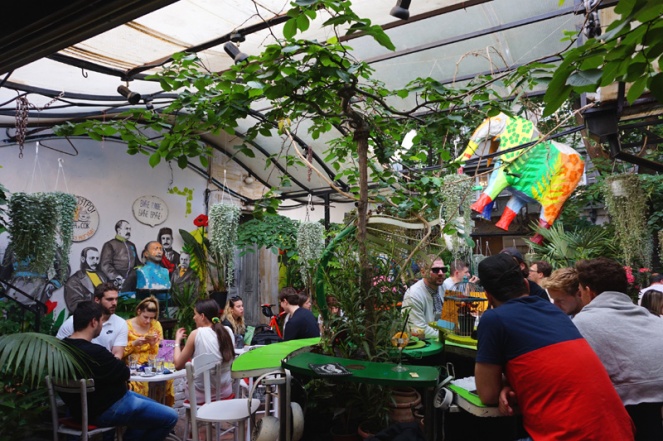 It was as crazy and awesome as it sounds.

And of course, we had to indulge in rakija as well – the traditional Balkan spirit!

Our guide, being from Belgrade, had organised dinner for us that night, so even though I’d been recommended a great restaurant (it’s called Walter, if you’re interested – and it’s right round the corner from Blaznavac!), we decided to go along.

I hadn’t been keen, purely because of our experience of the tour meals so far – in Sofia, we had gone to a really nice restaurant, but with so many of us, it took over two hours for our food to arrive (I was the last person to be served, of course), which remains to be the longest I’ve ever waited for food anywhere.

Somewhere in Serbia, we had pre-ordered lunch from a café – which turned out not to be a café at all, nor had it been pre-ordered. It was a service station, and first, forty of us had to queue up at a cash machine, and then forty of us had to queue up for food. It was pandemonium and the food was laughably awful. “Meat sticks”? I had gone for shopska salad (a traditional Balkan salad), thinking that I was being mildly cultural, and it was possibly the worst place I could have had one!

So to say I was apprehensive about another organised group meal was an understatement. But this was our guide’s hometown, so we decided to forgo Walter and go with the local recommendation, Velika Skadarlija.

It was actually really cool! A group of us had gravitated together throughout the day – we became good friends on the trip – and grabbed a table together. Our guide recommended that we order a meat platter between us, which we duly did. Once again, it took ages to come out, but…

IT CAME OUT ON A SWORD! A FRICKING SWORD! WITH FIRE.

And here’s where it went downhill. Don’t get me wrong, the food was great. We were all absolutely stuffed and happy and had a great evening.

But when your food gets served on a huge sword with flames, it’s understandable that people are going to want to take photos, right? Nope. Our waiter huffed impatiently from the second everyone poised their phones, and I politely waited my turn and told the waiter to go ahead, thinking that he was just putting something on the table.

He leaned forward and triumphantly swiped all the meat off the sword (before I could take a photo!) and covered all the fire before storming off. And so I only have my friend’s photo above.

I get that we were such an inconvenience for all of 30 seconds. But oh boy, it did NOT stop there. Remember the waitress throwing bread on our table and shouting at us to move in Bulgaria? Yeah, Serbia stepped that up a bit.

He threw plates on the table, practically breaking them. He was rude every time we tried to get his attention; sometimes he deliberately ignored us. It took ages to pay, and when we finally did, he demanded a tip, and threw our friend’s card in her face when she didn’t give him one. None of us did (and I usually tip where it’s customary – which in fairness, it is not in Serbia – but not when we haven’t received a good service).

The thing that shocked us the most was this was a posh place; the waiters were suited and booted, and we were even sat next to a fountain! The food was delicious and the restaurant was really lovely. But the staff were horrendous!

But, it’s a story we look back on and laugh. Did it ruin our day? Absolutely not!

So it turned out that Belgrade was a very pleasant (though extremely brief!) surprise.

It suffered from a similar effect that the first entrant on Eurovision always has – you don’t expect it to be amazing, and it’s buried beneath the rest of the acts until you sort of forget it was there. But then when you remember it, you realise that it was actually pretty cool all along.

While you’re here, do you fancy reading more about my Balkans trip? Here are some of the highlights:

⭐ Sofia: A City Of Colour And Contrast
⭐ Sorrow In Sarajevo: A Heartbreaking Tale Of The Bosnian Capital
⭐ Mostar: The Gem Of Bosnia
⭐ Surviving Dubrovnik – And Falling In Love With It
⭐ Hiking & Heating Up In Kotor, Montenegro
⭐ Adventures In Albania: Two Hours In Tirana Is Not Enough
⭐ Sunshine, Lakes & Statues In North Macedonia